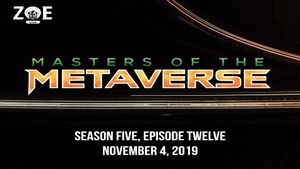 Zeus' plan takes the gods to Fallow Hall, where they must convince Baldur to free the prisoners within. Meanwhile in Arena, the revolution begins.

The gods separate and take care of some personal affairs. While Amon Ra confronts his doubt, Loki asks to hear more about Hex, and Zeus mends bridges with Poseidon, The Morrigan meets with the projection of Odin. The All Father recognizes that the time of prophecy is at hand and agrees to meet Zeus on the battle field in seven days. Back on the demi plane, the gods prepare to take the next step in Zeus' plan. They must travel to Antartica and free Odin's prisoners from Fallow Hall. The place should not exist per Zeus and it's up to them to remove it. Loki disguises them all as children of Thor and Odin, and they make their approach to Baldur. Initially suspicious, Baldur becomes much more willing to help when he realizes that Odin is actually Zeus and that Fallow Hall will be opened. All he can do is call the four goddesses that Odin has left to defend the prison, the rest us up to the gods. The battle is epic but fast. The Morrigan takes care of most of them while Zeus and Loki team up for a game show meet cute. Amon Ra strikes one blind in retribution and Fallow Hall is opened. Their victory is short lived however. Baldur reappears to tell them that the Humans First League has attacked the pit and every terrible beast is now set loose on the world. More than that, all the other gods have withdrawn from this plane. It's up to Zeus and his comrades to stop the monsters from destroying all of humanity. Back in Arena, Crash and the others learn that Brony has secured one of the sixteen spots in the Grand Tournament. The pilots head back to the Tournament grounds for the next round of fights. In the pilot holding area, Crash encounters another pilot who telepathically communicates with him. His name is John and he is the last of his people. He is also tired and asks Crash to remember him. Crash is different, in his words, and he knows that he will do what others can't. He is glad that Crash is going to fight back, but he is done. Crash promises to remember and John walks out into the ring. He allows himself to be beaten to death, much to the pilot's horror. Crash continues to defeat opponents easily but is stunned when his final opponent is a child, clearly terrified. Crash defeats him and moves up to the next level. On their way back to the base, the group is attacked by a group of hunters sent by an associate of Antonius. The pilots, with the help of their newly found god powers, easily dispatches them. However, it is clear that their abilities have been noticed. In the base, everyone is disturbed by the days events. While Zenda and Crash discuss possible mortality, Rosie goes to her room and asks Loki for help. Using the god magic, she casts a spell. In every pilot holding cell all over Arena a sign appears. On every wall the words, Hex Is Hope.