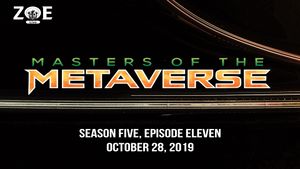 The pilots enter the Grand Tournament with surprising results. The god avatars take on the denizens of the underworld in a battle to sit on the throne of Hell.

Back in Colyseum, the pilots enter the Grand Tournament. With strict instructions to not be noticeable but still win, the group prepares to initiate the next phase of the plan. But things are a bit different since coming back from the God-verse. Maddox has woken up with black hair, Wyatt is having trouble with his words, Rosie is feeling the desire to take part in some mischief, and Crash is filled with a confidence he has never known before. Donning their disguises and assumed identities, they head off to get Crash registered. Things start to get a little strange when they try to get a blood sample from Crash. The needle breaks and leaves no mark on his skin. Things get even stranger as the fights start, with Crash exhibiting a strength and speed never seen before...and definitely not normal. Meanwhile in the owner's box, Rosie is attempting to pickpocket people while tying shoe laces together, much to Maddox's horror. Wyatt spots Lady Gwen ducking around a corner and heads off after her. He comes down a blind alley and she's gone. Except she's right behind him. Wyatt tells her who he is and she says that while she should kill him, she won't. With the words "Be seeing you, pilot." she vanishes. Wyatt returns and Crash wins the Tournament. He's on all the video screens and the crowd is going wild. So much for undercover. Back in the base, Zenda is unnerved as is Wyatt. While Crash and Rosie seem less so, Wyatt theorizes that the gods might be starting to subsume them. Back in the pods, the pilots find themselves in the depths of hell. Zeus and the other gods have been traveling to find allies in Tartarus. Except when when they get to where Tartarus was...he's gone. In his place is Apep and a glowing pool. In the pool Morrigan sees something fateful, Loki sees a broken Rosie, Amon Rah sees a good man, and Zeus sees only Zeus. Apep reveals that Anubus woke Tartarus up and that they can likely find him at the throne of hell, where Hades and Hela are having their confrontation. The gods descend on the battle and when the smoke clears, The Morrigan is sitting on the throne of hell. Just in time for Tartarus to show up. The remaining enemies flee the coming primordial. The Morrigan creates a replica of the throne within Tartarus and succeeds in making him vomit out some of the various beings that have been cast into him over the eons. Cyclops, Titans, and Sisyphus stand on the battlefield as Zeus and Amon Rah take on Tartarus. The Morrigan and Loki deal with Cyclops and Titans while Sisyphus eats some falafel. Tartarus is cast back down into the pit and The Morrigan splits the crown of hell in two, molds it into dental work, and places a piece in the mouths of both Amon Rah and Zeus.