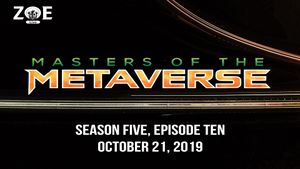 Zeus and the other gods have a plan, one which might give the pilots a lead on the mysterious Antonius...but they will have to blow up a bridge first.

Every god examines the new beings within them. They each reach an understanding with the other and the pilots are pushed to the background as the gods confer. Zeus reminds them all that they have a plan that needs to be completed, the same plan that they attempted thirteen years ago. The pilots suddenly regain some footing and are surprised when Zeus simply laughs and pushes Crash back down. He allows Crash to speak but even then, Zeus maintains the upper hand. The king of the gods agrees to help the pilots with the issue of Antonius, a name he knows, but in exchange they need to help him with his plan. The first step of which is to destroy the Bifrost. The pilots agree and a plan is hatched. First step is to lure out Thor, which is done by having one of Zeus' sons seduce on of Amon Rah's daughters who is engaged to one of Thor's sons. This works a treat and Thor is soon running out of Asgard in pursuit of this wanna be Romeo. The group then transports into Asgard and disguises themselves as guards. Unfortunately they are confronted by Heimdall and the Vanguard. Fortunately they have The Morrigan who pretty much destroys Heimdall immediately, as well as pecking his eyes out. Crash, while in the body of Amon Rah, uses the eye of Heimdall to send the god on an epic quest...to bring Butch Baker to Zeus. Meanwhile, Wyatt in the body of Zeus calls down a great storm which destroys the Bifrost. Zeus raises the fallen Vanguard in Olympus' name and instructs them to remain in Asgard until the true Norse returns. The Bifrost destroyed, the gods are exhausted and retreat to Zeus' demiplane for a rest. The pilots are pulled out by Zenda and everyone notices that Crash is acting strangely. No glasses in sight, he tells Zenda that "they got it" but they need to go back to get it. Zenda now lays out the next phase of their plan. They are going to enter the Grand Tournament with Crash as the fighter, Rosie and Maddox as bodyguards to Wyatt's pilot owning rich guy, and Andi leaving with Zenda to do some "spy shit". Crash attempts to help Andi understand that the relationship between pilot and avatar is a give and take but that they (the pilots) are always the ones in control of the relationship. Avatars can quiet them but they cannot push them out. The team has one more day to rest before the start phase two...and return to the world of gods to deal with Zeus' brother.