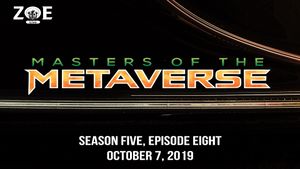 Life back in the home Metaverse is anything but ordinary...a team of slightly extraordinary people are brought together to investigate Planet Metaverse!

Lizzie Foster, Wendy Gates, Patric Lebowitz-O'Kelley, and John Stone are coming to terms with their new lives back on the home Metaverse. Wendy is cut off from the Metaverse for the first time and unsure of what to do, but she continues to investigate General Jaxun. Lizzie is getting closer and closer to the truth about Maddox, Wyatt, and what really happened in Toyland. John still searching for his brother and coming to terms with his new existence as a cyborg. Patric has only recently been released from Guantanamo Bay and reunited with Mac. He has a plan to keep Mac safe and find the others...he just needs time. The four of them have been recruited and summoned to the new Planet Metaverse facility. The world is no longer unaware of the existence of worlds outside their own, and the sealing of their Metaverse has had some unforeseen consequences. Pieces of other worlds have become trapped within and its up to Lizzie, Wendy, Patric, and John to collect and contain those pieces. Jeb is very excited to examine any specimens they come across. He already has a collection of Robopal parts, dead Project: Metaverse subjects, and other questionable things. General Jaxun, looking the worse for wear, gives them their orders but is evasive when Patric asks him what happened to Crash. The team heads out to Arizona, where a local hunters blind captured some disturbing images of an unknown creature...right before several gamesmen were ripped to shreds. Clearly this isn't a bear attack. Examining the site, the team is pretty sure it's a large worm. Or a dragon. Whichever. Wendy uses her knowledge of all Gates to recognize this as a burrowing creature that is definitely not from the home Metaverse. These beings are blind and work from vibrations. They are also dangerous hunters and, oh yeah, the males lay the eggs. The group comes up with a plan. Basically lure the thing out, run like hell, let John Stone shoot it. What they didn't bank on was there being two of them. Luckily they have Patric. So while Wendy and John Stone tase and shoot one, Patric and Lizzie blow the other one to kingdom come. Returning to the base, John Stone spends another sleepless night wandering the halls. Suddenly voice in his ear, "Hello? Is anyone there?" When John asks the voice who they are he gets an unexpected answer. "I think I used to be TOM."