Episode Seventy-Five: Come Out And Play 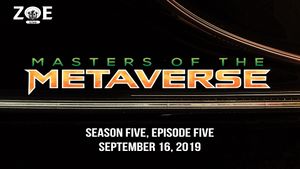 Jenika is finally reunited with the team and has some strange happenings to relate. The pilots leap into a world of vampire Nazis and come away with new connections.

Jenika wakes up in a room in Meta End prison. There are two simple benches and across from her, bandaged arms and a vacant expression on his face, is Brony Robbins. Before she can think, a door opens filling the room with light. The smells of Joe's Diner greet her and Brony suddenly springs into action. "This way." he says, leading Jenika into Joe's and down a hallway to a waiting broom closet. After marking the door with masking tape, Brony opens the closet to reveal pure white light. "Go, I'll follow you." He pushes Jenika out and she falls into a large garbage heap. In the sky above her, the white door winks out of existence and Jenika is left alone in a strange city. She wanders for a time and comes upon a slave market. A slicing pain in the back of her neck and Jenika falls, the words "A pilot! Just walking around out in the open!' the last things she hears. Time passes and Jenika begins to come too. Sounds of a fight are dimly heard and then a strange metal arm lifts her up and into a jeep. Meanwhile, back at the base, Andi, Bruno, Aquamarine, and Thomas are trying to understand each other and their current situation. Zenda returns with Jenika in tow and the others are struck by how much weight she has lost. Her tales of Brony are perplexing and the doctor goes off to sleep off the effects of her drugging. When she awakes, Zenda gives them their new mission. They will be traveling to a world where Nazis are run by vampires and all manner of dark creature are twisted to their purpose. TOM is hiding somewhere in Normandy in June of 1944. Entering their avatars, Andi, Aquamarine, Bruno, and Jenika travel through the small French village in search of Thomas. They eventually find him embedded with the Nazis. It seems that this iteration of the Axis of Evil is trying to create a serum to allow vampires to walk in the daylight. They are doing this by summoning demons and turning them to their purpose. And somewhere within this is TOM. Thomas is able to get them into the compound but any further will require different tactics. Thomas receives the boop boop and a special collar, one that will keep TOM from jumping bodies. The group moves off into the facility and using blood magic, the power of silence, and a werewolf, manages to get rid of a whole bunch of Nazi guards. Eventually the come upon an empty guard station and enter a lab. The door slams shut and locks behind them. A giant summoning circle in the middle of the room soon gives way to a giant fiery demon. And TOM was the one who summoned him. The pilots see a flash of Hawaiian print going down a back hall just as the demon attacks. Thomas breaks the summoning circle, removing the demon from Nazi control. The others prepare to attack as Lady Evelyn does a quick check of the royal line and determines that this demon is far FAR beneath her. She commands the demon to bring her the one who summoned her. The demon disappeared and the pilots race after TOM. The arrive in an underground garage in time to see a car speeding away. Using magic, teleportation, and Tai-Kwon-Slow, the pilots appear at the car and quickly capture TOM. Thomas puts the collar on him and they travel to a local airfield. Several thousand miles above the rest of the world, the pilots call for Rhodes and are greeted by white light. Back in the base, Zenda notes that Andi has bonded and warns that any bonds the pilots gain can be used against them, especially in the city of Coliseum.