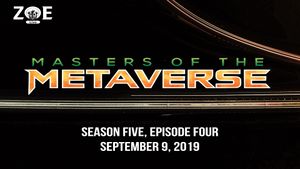 Andi, Bruno, and Aquamarine make their escape from Meta-End and team up with Thomas and Zenda for a new assignment from Rhodes. They are being sent to a Metaverse in the 1920s...to arrest TOM.

Andi, Bruno, and Aquamarine are broken out of prison by Rhodes. He meets them in Joe's Diner to offer them a deal, charges dropped and freedom to go home...as long as they arrest TOM first. It seems that Zenda's sabotage of his metapod has prevented TOM from entering avatars...so he is leaping into normal people instead. Bruno is given a chance to leave, bonds intact, as he was never actually charged with or guilty of any Metaverse crimes. He was simply brought along because his granddaughter, Andi, asked for him to be kept with her. He refuses, choosing instead to remain with Andi and Aquamarine. Rhodes leaves and Andi spots a dark haired woman drinking a milkshake. The woman motions them down a back hallway and then disappears. Andi and Bruno go to investigate and find a broom closet that is marked, "Definitely Not A Way Out". Entering the closet, the pilots are transported to Arena where they are met by Thomas and Zenda. Zenda welcomes them back to the base of operations that he and Thomas have set up. Zenda gives them the information he has, the other team are out in Coliseum while Jenika and Brony are still unaccounted for. The pilots will be going into a Metaverse where the avatars are destined to die within twelve hours...and they need to let this happen. Before the end comes, the pilots need to find and arrest TOM. Zenda promises to send them a device to locate TOM when he is able to lock in on them. Thomas, Bruno, Andi, and Aquamarine leap into the bodies of the O'Connor clan, who have just robbed a mobster's hotel. Thomas takes control of fourteen year old Danny and, with some help from Presto, is able to drive the getaway car to great effect. The others dispatch their police pursuers and eventually they find themselves alone on the road. Zenda manages to get them a "boop boop" to locate TOM. They come upon a church and its lone inhabitant, Father Tom. After some tasing, strip searching, and eventual hand cuffing, the pilots have no idea how to actually arrest TOM. The sound of cars pulling up outside indicates that the mobster has come to collect what was stolen from him. Father Tom ushers everyone down into a hidden room in the cellar, one that was used for the Underground Railroad. Bruno begins to wonder if he isn't supposed to shoot Father Tom in the head when Andi asks for a loot box. Father Tom is here to serve and asks Andi what she needs. She asks for a "means to arrest you" and gets exactly that. The pilots leave the Metaverse and return to report to Zenda.