Episode Seventy-Three: Our Rob Or Ross 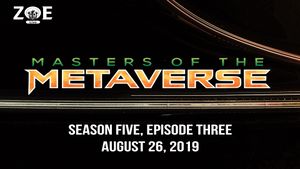 It's time to break free of Meta-End Prison. Along the way, the pilots uncover devastating truths and unexpected secrets...and learn that they are facing a new kind of evil.

The pilots deal with the last of their attackers and rush Zenda to the nearest Med Bay. Thanks to his injury, Zenda takes a backseat to the personality of Captain Jack Rackham. The captain is much more forthcoming that Zenda, and reveals many secrets. Among them, both Captain Jack and his pregnant wife Anne were executed due to some actions that Zenda too. In addition, Zenda isn't even his real name. He was previously known as "Z" and was called that by his pilot...Jebediah Lexington. The group decides that they need to start making their way to Evidence and Thomas. Jack reveals that Zenda knows the only way to get to evidence, and eventually Joe's, is to basically pull the fire alarm and run through the emergency doors. The pilots head toward the incinerator in order to overload it and realize that the drones don't travel down the older passages of the prison, meaning either they aren't detectable there or they were never supposed to find this route in the first place. Inside the incineration room, Zenda takes over once more and rigs the device to overload and spread fuel and flame throughout the center of Meta End. This done, the pilots head off through the nearest emergency exit. They travel through rooms marked "The Judge", "Death Row" (population CLEANERS), and "The End". At last they find evidence and Thomas, who is actually evidence himself. Searching through nearby containers for traces of the evidence being presented against them, Crash finds a banana phone. When he calls it, he reaches the voice mail of The Bakers, who are currently off planet looking for their friends while Hex Destiny is left in charge. Heat and flame press closer and the group rushes through the last door...and into Joe's Diner. There they are met by Rhodes, who congratulates them on their escape. He reveals that he was the one orchestrating their break out all along. He needs them for a job, taking on a class five metapilot named Antonius Basileus. Basileus has murdered thousands of avatars and pilots, destabilized countless Metaverses, and he killed Wendy Gates...Rhodes' partner. In return, he promises to get them back home, if that is where they wish to go, all charges dismissed as much as he is able. He will also give them an overview of Metaverse Law so they can avoid any infractions going forward. The severed bonds of their avatars however is not something he can undo. Those connections are gone forever. Rosie and Crash are devastated while Maddox is eager to return home to her brother. It is revealed that Thomas, as evidence, was not severed and has retained his connections. The pilots agree to Rhodes' request and he takes his leave. Hollywood approaches with their food and gives the pilots a nod. But they slowly realize that he wasn't nodding at them, but at the lone milkshake on the counter.