Episode Seventy-Two: A Link To The Past 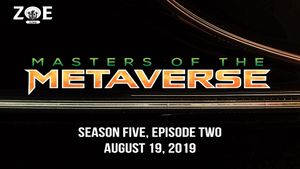 The group finds themselves in what appears to be an abandoned hallway with guard station. They take some time to investigate while Thomas informs them that they need to find Zenda and then meet him in Evidence. Thomas disables the drone and the pilots are left on their own. Crash spots drag marks in the dust, indicating that someone was recently removed from their cell and dragged away. Rosie realizes that this is what happened to her when her finger was broken. Maddox finds a key card for B3 and a memo mentioning THE CLEANERS and advising all employees of Meta End to avoid their routes. They soon meet these cleaners, a swarm of metallic wasp-like robots, and just barely manage to escape their notice. They find a door marked B3 and use the keycard to enter. They are now in a new section of the prison. Further on in, they find the Infirmary. Wyatt and Rosie begin trying to crack the computer, much to Crash's growing frustration. He manages to get himself some medication to help level himself off but is still frustrated by their lack of progress. Everyone is so caught up in their own tasks that no one hears the drones until it is too late. Maddox and Rosie are able to destroy their attackers while Wyatt protects the computer. As the smoke clears they read the patient files of Brony and Zenda. Brony poisoned himself by eating paste while Zenda was attacked by his cell mate. Using the broken drones to make flashlights, the group continues on and eventually ends up in a break room. Crash is becoming annoyed at their constant searching for answers that don't seem to be there and only is interested in going to find Butch. The Cleaners make another appearance and it seems as if they will be trapped this time...until Crash uses the parts from a drone to trigger a hidden door, leading into the wing which houses Segregation and Zenda. They soon find Zenda, in cell 42, and release him. Just as he is getting acquainted with everyone, a door opens and Mofield aka the escape artist appears and shoots Zenda in the chest. He falls and the pilots engage, eventually taking out Mofield and his henchmen. They rush a critically wounded Zenda, who manages to pocket a shiv on the way out, to the nearest Med Bay.