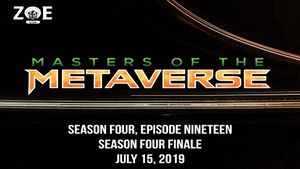 The fight for the Metaverse takes a dramatic turn. When the smoke clears, nothing will be the same again.

Andi tries to convince Isiah that TOM has been lying to him this whole time but only succeeds in getting herself ejected from his dream world. Upon waking, she finds the others recovering from the blast of the TOM-bot. They are quickly joined by the rest of the pilots and Crash fills them in on everything they missed. The team splits up. Crash, Thomas, Aquamarine, Andi, and Wyatt head off to stop the bombs while Maddox, Bruno, Jenika, Brony, and Rosie stay behind to guard Joe's. The sign on the diner has changed from "Open 24 Hours" to "Open 17 Hours", while the inside of the diner itself is empty. There is a sign on the door that says "Be Back In..." with no time. Crash and his team head off to stop the bombs from falling. The team outside the diner soon comes under attack from TOM's pilots and it quickly becomes clear that they are fighting pilots who possess powers that mirror their own. Meanwhile, the other group of pilots each manage to stop and disable the warheads before they reach their intended targets. Thomas does a quick TOM check and realizes that this is likely a distraction to prevent the team from being there to stop the invasion of Joe's. Racing back, Crash and the others join forces with the other pilots. Combining their abilities they are finally able to take down TOM's pilots and a moment of calm descends. It seems that for the first time they might have managed to get a step ahead of TOM. Rosie, Crash, Brony, Wyatt, and Andi go inside. Thomas and Bruno stay outside to watch the perimeter while Jenika and Aquamarine notice an unmarked van in the back. The van is near an open sewer grate, and the two women decide to investigate. Following the path they emerge in the kitchen of Joe's. Out in the dining area, Hollywood is rushed off his feet as the place is packed. When asked why, he says that it is because the Metaverse is about to break apart. The world is going to end in about twenty minutes. Wyatt notices someone who doesn't seem like they belong, a small Asian woman. Unfortunately he notices her right as she stabs Andi. Hollywood marches over and attempts to intervene, only to find his powers gone. Someone has switched his ticket book. TOM enters the diner in Isiah's body and Zenda emerges to hand him the real ticket book. He then retreats to the kitchen to complete the pod while TOM freezes the diner and proceeds to monologue. Zenda returns and suddenly flips the real ticket book to Crash. Crash catches it and tries to send it to Hollywood but misses. Time rewinds and they are frozen again, only this time TOM is expecting the double cross and stops Zenda. He takes the ticket book and throws Crash and Zenda out of the diner. They disappear and TOM enters the metapod. Crash comes to in a Metaverse he has never seen before. Zenda is nearby, wounded, and a garbage truck is rounding the corner. Back in the diner it seems like TOM is unstoppable...and then the garbage truck crashes into Joe's. A horrible sound and bone crunching pain, and Joe's is gone. The pilots stand up and realize that they are no longer connected to their past avatars, the bond is cut. Rhodes appears to bring them in. He gave them three days and time is up. One by one they disappear though Rhodes admits he doesn't know where Crash or Zenda are. Turning to Hollywood, Rhodes instructs him to close down and seal off this Metaverse. Hollywood agrees. Some time later Colonel Jaxun approaches the last place his son was seen on this earth. "Thank you son. I'm so sorry."