Episode Sixty-Nine: What Goes Up... 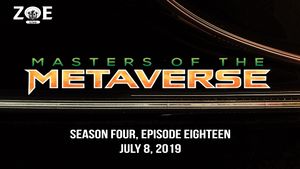 Things get decidedly more "real", as Crash, Brony, Andi, and Bruno take the fight for the Metaverse too...Nevada! TOM reveals hidden weapons and a terrible choice must be made.

Crash is told by his father that he must select a team and head to Nevada. Once there, they will be the last line of defense between Zenda and Joe's diner. Crash selects Brony, Andi, and Bruno, much to his father's surprise, and the group sets off. They almost immediately come under fire as they approach the town of Jarbridge. Steering their ultralights into the best version of a crash possible, the pilots are seperated. Crash and Brony are attacked by soldiers and...trees? Andi and her grandfather, Bruno, face off against a tactical squad and some powered individuals. Bruno is finding himself a lot stronger and healthier than he remembered, while Andi is demonstrating her connection with a Titan powered avatar. Brony and Crash managed to take out the majority of their attackers, especially since they didn't happen to land in the middle of a kill box, and head off to help the other members of their team. Working together, the pilots manage to survive the onslaught and make their way toward the abandoned town. They cannot see a Joe's Diner but Crash and Andi can sense it. The diner is hiding at the moment but there is no more time for discussion. Another group of tactical squad members is heading toward them, as well as several more pilots. Andi's empathy senses a lot of people coming, one of whom is deeply enraged...and one of whom is terrified. A tank bursts through a nearby shed and opens fire, just as Andi feels her powers begin to drain. Crash reaches out and senses a nearby pilot, spying a young boy in a window nearby. He appears to be the source of the power drain. Before any action can be taken, a TOM-bot attacks from the other side of town. As the other pilots face off against their attackers, Andi enters the dream world of the young boy. He seems to be like Crash, viewing the world in a different way, and he tells Andi that his name is Isiah. He says that TOM is his friend as he helped him escape from the cage Jebidiah had put him in. Isiah was being hidden as Jebidiah believed that Henrich would have killed him if he had been found. Crash, Brony, Andi, and Bruno launch a final offensive and manage to stop TOM's soldiers and attacking pilots. The partially destroyed TOM-bot then says that the pilots have forced his hand...as he launches five nuclear warheads across the country, and detonates his artificial body.