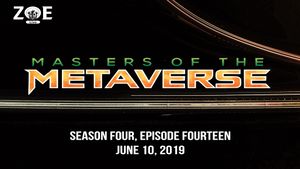 In the search for the right Joe's Diner, the pilots return to the world of Magical Space Princesses! Old friends are reunited and TOM shows his true colors...

The Sparkle Sisters are reunited in an attempt to discover which Joe's Diner is the intended site of the final confrontation with TOM. Tessa, Jenika, Aquamarine, Rosie, and Thomas are sent back to their former avatars. Once there, they find that Chad has been missing for some time. He comes to himself in a dragon's lair holding a dragon's egg. His memory is spotty but he does recall taking on a catering job for the wedding of the year in the Djinn galaxy. The mother of the bride, a rakshasa, requested a great omelette made with a dragon's egg. But Chad refused to make the dish...and yet here he is. After some verbal sparring and biology lessons with a dragon mother named Carl, the Sparkle Sisters are reunited with Chad who informs them that he took the job simply because he was to be paid with a wish. He misses Brad greatly and would do anything to get his bro back.Returning to the Djinn Galaxy, the omelette is prepared and the wedding set to begin. Chad then catches sight of the wedding singer, who is none other than Brad. The bros have a tearful and heartfelt reunion, completely upstaging the bride, and Chad informs Brad that he intends to use his wish to regain his keepstone and magical princess powers. He does this by shaking literally the cutest tiger baby ever and is once again Chad, Magical Space Prince Tabon (formerly of the Esteban Galaxy). It is at this point that all the pilots regain some control and remember their mission to seek out Joe's Diner, something they are also told to do by Brad who was told by Hollywood that they could not forget to go to Joe's. They set off to the nearest Joe's diner, only to find their way blocked by an armada of Mannschplainers. At the helm of the lead ship is none other than Baron Mannschplainer...and at his shoulder like a Metaverse Iago is none other than TOM. The Baron seems unaware of his parasitic friend though all the pilots are able to see him clearly. The Baron attacks the princesses but is no match for their newly united powers. Vega tricks him into surrendering and the fleet departs, allowing the princesses to descend to the planet's surface. Once there, they make their way into Joe's and talk with Hollywood. He's sympathetic but unable to offer much assistance. He does however, offer to let them see the junk room provided they bring their milkshakes with them. Smelling a rat, Zelenia questions Hollywood while Chad notices that everyone appears to be moving more like puppets than people and Hollywood's feet never seem to leave the ground. The jig is up and Hollywood reveals himself to be a tongue. It appears that the entire diner is actually a giant kaiju sized mimic that has disguised itself and is currently in the process of digesting Galaxy Force Five. Rosie uses her time as Chimera Blaze to learn that the only way to properly kill a mimic is through dismemberment. Thomas summons castor oil and allows the princesses to escape the mouth of the mimc via vomit. Once outside, the team summons their giant robots and goes to work. The mimic is completely discorporated thanks to the powers of sun, moon, time, space, Chad, and a giant fish. Approaching the real Joe's Diner, which was located only a few feet behind the mimic, the team realizes that they must find some way to mark this diner so that it can no longer be the one seen in Crash's father's vision. Chad paints it pink and marks it with the symbol of Galaxy Force Five as they enter the diner to confer with the real Hollywood over some strawberry milkshakes and pie.