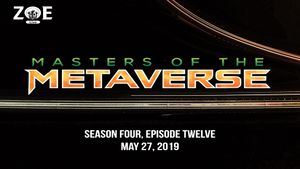 Balthazar's premonitions lead Bombshell, Lady Veil, and Skinwalker deep into Kronos' territory. Once there, they discover a darkness that might just consume them all...

Bombshell, Skinwalker, Balthazar, and Lady Veil have gathered the survivors of Sentinel City in Rome. They are waiting anxiously for word from Butch, Abbi, or Hex but have received none. Balthazar has even lost his connection with Hex...and he has been having premonitions night after night. A terrible thing is coming, an event that could spell doom for them all. He has tried countless ways to combat this fate, finally arriving at one possible solution. He convinces the others that they must leave the safety of Rome and head directly to the heart of Kronos' territory. The others are hesitant at first, especially since Balthazar is not able to give them any specifics due to a risk of changing the outcome, but they finally agree. Bombshell leaves a container of nanowasps with Johnny Legion and the group sets off. It isn't long before they encounter more golems, this time made of some gelatinous substance. As they attack the group, Bombshell dries them out while Skinwalker absorbs more of them...only to find her body is no longer under her control. It's only when Maddox takes over that she is able to stop attacking her friends. Bombshell and Balthazar work together to remove quantities of the swallowed golems as Skinwalker shrinks in size and density. Eventually they have removed enough that Skinwalker is able to control her own body. After some soul searching, Maddox and Skinwalker decide that it is better to purge the remaining golems and return to her normal size and weight. Just as this is being accomplished, a swarm of flying nano wasp like golems appears and begins to bear down on them. The group flees in a train made of Bombshell and eventually reaches the place where Balthazar senses that they must intervene. They find various machines digging a large hole, half a mile wide. The group sets to work attempting to disable the machines and eventually succeeds, as Maddox/Skinwalker dives into the hole to see what is at the bottom. She encounters hands the size of houses, shaped like shovels. Some creature is digging its way out. The group begins trying to fill in the hole and prevent this entity from reaching the surface. Balthazar summons his necromancy and cuts the beast in twain with a giant scythe. Skinwalker absorbs the golems and machines nearby, while maintaining control, and becomes wet cement. She flows into the hole, sealing it, while Bombshell dives in after her. The world turns cold as Kronos appears. He changes Lady Veil's bones to silver, torturing her in the process, but Balthazar manages to disrupt this. He cannot change her back to the way he was but he is able to stop her pain...something Kronos is unaware of. Kronos pulls Bombshell out of the pit and separates her into individual nano wasps, which he tortures with EMPs. He then turns, ready to kill Balthazar...who has suddenly vanished thanks to Bobby Maxwell. Skinwalker finds herself compressed into a softball and pulled back to Kronos, who reveals that she is actually a part of him, "blood of his own." Meanwhile, Aquamarine uses the power of Time Shift to create a duplicate Lady Veil, which she leaves behind, while the real Lady Veil jumps back twenty seconds and escapes...all without Kronos' knowledge.