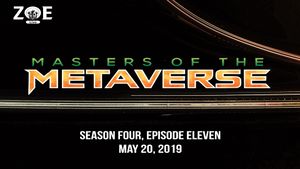 Thomas, Jenika, and Maddox travel to Egypt in an attempt to take down the final spire. What they discover reveals new information about Kronos...but at what cost?.

Maddox, Thomas, and Jenika are sent to Egypt in an effort to take down the final spire. As they travel, their Atlantean vessel is beset by small clay golem-like creatures. They seem particularly drawn to Thomas and nearly kill his avatar. Bombshell and Skinwalker take care of the majority of them, with Skinwalker finding that they are prone to simply sitting and staring at her. She ingests six of them, absorbing them into her form, and finds that she becomes bigger and heavier as a result. Traveling on, Bombshell notes that the spire should be directly in front of them and yet they can see nothing. Maddox shifts into a Sandworm and carries the party through the massive sandstorm that surrounds them in the hopes of finding the spire. Things seem to be going well when a giant sand hand lifts the entire party out of the sand and begins strangling the sand worm. Bombshell uses her nano wasps to freeze the hand while Cicero and Skinwalker damage it. As the hand freezes so do the rippling sand dunes that surround them. The team can now see a beautiful oasis, surrounded by perfectly carved sandstone sculptures of every shape, size, and type. The team travels to the oasis and encounters a young boy made of sandstone. He cannot remember his name or how long he has been there. The only thing he can recall is that sometimes the red hooded man comes and sits to watch them, but he does not know who this man is. Everything in the oasis has forgotten who and what they were. The boy does remember the spire but he says that they "can't see it any more". He does not know why. It appears to Jenika that these may all be living embodiments of memories. The team attempts to bring the boy with them but as they leave the oasis, he turns into swirling sand blows away. As they continue on, the spire suddenly returns to view. From the ground arise man sized hands that now surround them in the sands. Between and holding and rock/paper/scissors, the team manages to destroy the hands that try to hold them down. Skinwalker absorbs several of these hands and becomes even larger and more dense. The trio continues on toward the spire and find that the closer they come to the spire the less and less the feeling of repulsion becomes. Suddenly, from seemingly out of nowhere, two sword blades pierce Bombshell. Several nano wasps fall dead and a red cloaked figure appears behind Bombshell. The mystery swordsman takes several more swings at Bombshell and more nano wasps fall dead. Thomas summons a Scroll Of Mage's Disjunction from another Metaverse (probably Questlandia) and casts it on the spire. The spire comes apart and falls and as it does, at the very top of it, a body is seen falling from where it had lain above. Cicero fires his force gun and manages to keep the body from hitting the ground at terminal velocity. Bombshell body slams the swordsman with her nano wasps, revealing a human looking person underneath...whose skin is stitching itself back together. And he looks very familiar to Bombshell...he also is looking at Bombshell with extreme hatred. Thomas/Cicero suddenly disappears completely. Maddox calls for a loot box and one appears, along with TOM. She asks for a virus to put into the eyes of the mystery attacker. The virus eats away at the flesh on the body and reveals a metal skeleton underneath. Thomas finds himself in a massive black geometric chamber. The wall contain dozens of humanoid figures, Poseidon, Cytron, and others, half consumed by the black surface around them. A red eyed figure sits on a throne...Kronos. As he launches into a monologue, Kronos reveals that he is the one who created Project: Metaverse and that he has taken over the body and mind of a pilot in their home Metaverse. He destroys the trident of Poseidon and sends Thomas into a mind prison, a half flooded room which contains the minds of the others being held in the walls.