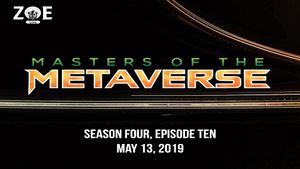 Butch and Abbi are reunited as they race to take down two of Kronos' spires. Teaming up with Balthazar, Hex, and Ezekiel, they must face old foes and lost loves in their fight to save their world.

Butch is reunited with Ezekiel and Abbi, thanks to Hex and Balthazar, but there is no time for talking. The jet that they borrowed from Armor Guy comes under attack near the coast of Japan. Hex and Balthazar fly out, while Butch carries Ezekiel and Abbi to safety. They fight off giant metal hamster balls and everything seems to be taken care of...until a round the size of a garbage can is fired from downtown Tokyo, heading straight for Hex. Harvey jumps in the way, taking the damage, and retreats to the Fae Wyld to heal. Enraged, Hex takes off toward the source of the shot with the others close behind. They find the city covered in reflective metal panels. As the others attempt to find off the attacks of giant Macro Wasps, Hex heads to the source of the shots. She finds what remains of Griefer held in the center of a giant robot. Griefer begs to die and Rosie takes over. She demands information as a giant tentacled monster appears in the ocean nearby. The beast reaches out and rips Griefer and her metal prison into the ocean. At the last moment, Rosie uses Mercy to kill Griefer. She then flies back to the others. Crash acknowledges that the Metaverse is the likely source of the beast that just saved them. He also urges Rosie to talk to Hex and she won't be there forever to keep her from making mistakes. Butch uses his Titan powers to take down the spire and it becomes clear that the one in St. Petersburg is the next weakest one. Approaching the area, Balthazar and Hex feel Titania's touch. Upon landing, the team is sucked into various illusions. Hex and Ezekiel see various scenes from their lives, while the others are back on Mount Rushmore with General Mayhem. Abbi begins to become overwhelmed by her empathy and Butch attempts to calm her. At that moment he becomes fully Butch, Crash leaps out to an unknown location. Butch assures Abbi that she remembers him as he remembers her. The illusion shatters for everyone and they finally see Titania as she is. Wrapped in chains, covered in wounds, the fae queen stands prisoner by her spire. Balthazar attempts to appeal to their shared past and Butch wraps her in chains to prevent her from sending any more power the spire. Abbi channels Andi and causes the spire to vibrate before using Angel's magic and her own powerful empathy to heal and soothe the otherworldly woman. The chains break and Balthazar and Hex remove the runes holding Titania prisoner. Balthazar kisses her forehead and sends her back to the fae wyld. Ezekiel recovers some vodka as the group gathers for a rest and a drink, wondering how the other group is getting on with taking down their spire. Meanwhile, Butch and Abbi wander off for some quiet time together.