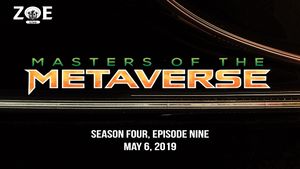 Hex races to her grandfather's side only to find Maddox, Thomas, and Crash. But no one is as they used to be and Butch has been far more damaged than anyone could know...

Hex and Balthazar are reunited in Atlantis, just in time for a massive tidal wave to threaten them all. Thomas appears in a new avatar, and that isn't the only thing that has changed. His mind is bursting with the knowledge of the Metaverse as his physical body has been restored to him in the home world. While the group discusses options, a loud banging draws their attention to the bowels of the city. There they find a haggard and imprisoned Butch Baker, his memory completely wiped. Luckily Crash is there to help him and give advice, and seems to be starting to help Butch recover the pieces of his mind that were lost. After freeing Butch, the team goes down the hall to release Maddox from her prison, as Skinwalker has been being held and experimented on for some time. The group then turns their attention to the approaching wave which they are able to defeat with a combination of magic, death metal screams, and punching. Butch begins receiving information from HAL and discovers that not only is Kronos back, but that he is the last of the Titans. Pieces of his memories return and he tells the others that he found Migraine, who was being used to power a battery of some kind in order to hide the island of Cuba which is where all the psychics from Sentinel City are currently hiding. Hex tells Butch about the spires and they decide to head off toward one of them. Butch recalls that the spires are used by Kronos to amplify his powers and will eventually lead to the complete destruction of the planet. Approaching the nearest spire, everyone but Skinwalker feels the discomfort. Hex and Balthazar recognize it as dark face magic, specifically magic from Titania...Balthazar's ex and Hex's grandmother. Butch goes into his Titan form and is able to resist the repulsion. Just as they are able to close in on the structure, a large watery hand emerges from the ocean. Riptide appears, summoned by the power of friendship and Thomas, standing seven feet tall and holding the trident of Poseidon. He has become a hand of Kronos and strikes Titan with the mythical weapon, causing the hero to bleed. Thomas manages to unsummon him as the others grab the trident. Titan continues his approach to the spire, with Rosie directing him as to the best place to hit. He does so and the tower collapses, as Balthazar sends a message of support to Titania. The spire down, Hex can tell that the field of repulsion is not weakest in Japan. It is now that Balthazar has a premonition...the spires still stand and Kronos rules the world. The ancient being looks at the sorcerer and says, "You're too late."