Episode Fifty-Nine: The Sky Is Falling 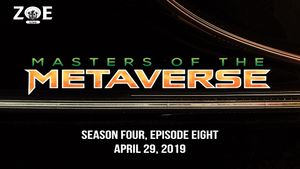 It's been six years since the dome came down in Sentinel City. The avatars are not quite as we left them as they face a new and much more dangerous threat that could destroy everything.

Rosie, Andi, Brony, Aquamarine, and Jenika are sent back to the Metaverse of Sentinel City as TOM believes that it is in this world that the threat to the Metaverse resides. It's been six years since the dome came down around Sentinel City. Hex is nineteen and along with Lady Veil, Abbi, Balthazar, and Johnny Legion, sits on the council that now leads the city. Butch and Bombshell left six years ago, in pursuit of Migraine, and have not been seen since. New developments in the form of technological growths appearing on the surface of the planet are the latest cause for concern. Abbi, Veil, and Hex are about to start their daily meeting when Johnny, Hex's crush, arrives with news. Bombshell has returned but without Butch. Abbi asks after the former Kid Titan but Bombshell has had no contact with him for months, having left after the trail for Migraine went cold. She had her own mission to complete. Finding Cytron, Bombshell learned the truth of her origin. She is a single self replicating nano wasp left in Sentinel City by Cytron in order to spy. For his part, Cytron is responsible for the zombie plague that ravaged the landscape outside of the dome. Depressed, he tells Bombshell to do better than he has...and then goes off to sulk in Australia. Bombshell tells all of this to her friends along with some disturbing news. In her travels, Bombshell spied tall spires thousands of miles high. As she drew closer, tiny humanoids appeared to be building them. However a feeling of dread and repulsion prevented any closer examination. While they are taking in this information, The Astronomer arrives with dire warnings. A field of debris has gathered in the skies over Sentinel City and are set to begin a 48 hour barrage of the city within the next three days. It's around this time that Ezekiel the Undying arrives having just been arrested by Johnny Legion. He has come asking for help with a vampire infestation that threatens to wipe out the primitive civilization of humans that he is coaching towards viability. More pressing matters take precedence, and Bombshell and Abbi head off to the nearest spire to investigate while the others attempt to build a debris destroying laser and coordinate an evacuation of the city. Once again the feeling of unease and repulsion prove too much for either Abbi or Bombshell, and they are unable to get close to the structures. They do however take some geological samples...and spot a megastorm heading toward Sentinel City. In fact it will hit as soon as the debris starts falling. Hex travels to Joe's Diner in the hope of gaining some answers but Hollywood is tight lipped. Regrouping in the city, Ezekiel is disturbed by the samples Abbi and Bombshell have brought back. They show the signs of a terrible and ancient being named Kronos, who can unmake reality with his will alone. And he hates Titans, telepaths, and is none too fond of Ezekiel. Abbi is the most powerful telepath in the city currently, as both Migraine and Molly have disappeared. Plans are made to save the city and the people within it. Andi/Abbi uses the powers of Angel (her former avatar) to multiply Bombshell eighty times using mirror magic. Bombshell/Jenika increases that duplication due to powers taken from Johnny Legion. She then channels her former avatar of Elliana and uses the power of the sun to turn all the hail and snow within the megastorm to rain. Her thousands of nanowasps then force the water down into the ocean, thanks to the duplicated power of Riptide. Hex/Rosie and Lady Veil/Aquamarine use their prior avatars of Zelenia and Geena respectively, to craft the debris into a moon for the moon. The city safe from disaster and the people evacuated, Hex feels a call for help. Balthazar is in danger and needs her. She teleports to him instantly in Atlantis and is met with a wall of water, as a tsunami bears down on them.