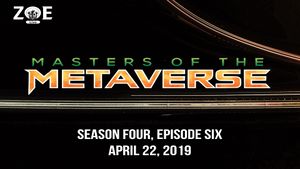 The pilots and TOM race against time to save a dying Metaverse while recovering a hidden map. Meanwhile, Zenda isn't quite as he used to be...

Crash, Rosie, Brony, and Andi regroup after destroying the Brood Queen, and TOM reappears. He is clearly under a great deal of strain from watching so many different pilots in so many different worlds, as well as keeping Rhodes at bay. However, he has come to the decision that not only must the avatars survive, but the Metaverse they come from must as well. He has a plan and a loot box to make that happen. The pilots move forward and encounter an old navy ship, crashed into the core of the planet. Inside they find many corpses, one of whom stands up and fires a rocket launcher at them. Animated by some form of green energy, which is distinctly different than the plague, the corpse attacks Brony who retaliates by obliterating many of the other bodies nearby. Rosie and Andi follow suit, while Crash calls down a loot box with several proton packs and a ghost trap. The team combines their ghost busting powers to trap whatever the green glowing energy is and head off. Wading through green plague goo, the team is attacked by a giant tentacled creature. Through teamwork, a lot of crazy guns, and some not so human reflexes, they manage to dispatch the creature fairly quickly. TOM reappears and directs Crash down the giant hole from whence the monster came, stating that the map they seek is down there. The other pilots are to continue on to the planet's core in order to destroy it and save the current Metaverse. After an epic group hug, Crash departs and enters a huge stone chamber covered in carvings. At the center of the chamber he finds a glowing source of light, color, and peace...until something much more dark and sinister appears. A former avatar, a former dead avatar, of Crash's appears. "We hoped that you would return to us, Jaxun. You will be our ticket out of here..." Crash uses the combined powers of all his past avatars to overpower and destroy this foe while the others take on a large group of plagued insects and a lava worm. Rosie summons Mercy and passes it to Andi, who rides the giant worm into the heart of the planet and uses the soul sword to kill it. TOM appears, leading Crash along behind him, and uses his loot box to transport all the pilots and avatars away, but not before Brony opens the ghost trap and releases the green light into the core. Back in the real world, Andi awakens to hear that not only has TOM found her grandfather, aka Bruno Hamilton, but that Abigail is waiting for her. Rosie, Crash, and Brony exit their pods to find themselves in the middle of a fire fight with The Program. Brony and Crash team up in the most epic Bromance ever, and Rosie uses her considerable skill to take care of the strike team. As the smoke clears, Zenda wakes up. Except he isn't Ronald Zenda any more. Crash calls him an avatar...because his body is controlled by Jack from the Iron Fae Realm.