Episode Fifty-Six: Damned If You Do 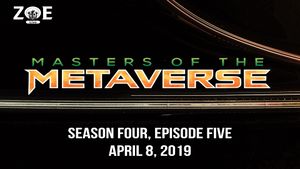 Maddox is reunited with the others and they set off in search of the mysterious artifact. But what the island reveals about itself and its inhabitants might be an even bigger discovery...

The group is reunited with Maddox, who is having some trouble wresting control from her avatar. They finally head off in search of the artifact that TOM has sent them to find. Jenika recalls seeing what appeared to be a suburban house nearby. When they approach the front gate, riding on Aquamarine's pet ant, they are met by none other than Jimmy Hoffa. Jimmy gives them some fruit, some directions to Sasquatch Pass, and some advice. No one has ever returned from where they are heading, he thinks it would be better to avoid the whole thing. The pilots thank him for his time and press on. They soon encounter the sasquatch, who is less than thrilled at the arrival of visitors. He throws several large boulders at them until Jenika manages to drug him with plant smoke. Happily munching on some jackfruit, provided by Maddox, the sasquatch lets them know that the desert that sits between them and the temple that houses the artifact is impassable. And in case anyone thought about taking to the sky, there are giant birds that will eat them. TOM appears and surmises that the desert causes great amounts of despair in the those trying to cross. Before they can begin though, they are held up by Rhodes, who appears and admonishes them on their behavior in the Metaverse. He issues them tickets and says that it is their last warning, before disappearing once again. The group devises a plan to have the ant push them down a hill in a very large ball, which will hopefully propel them across most of the desert. It does, but not so far that they are able to avoid the waking nightmares that plague them. Jenika sees Alison heading to the electric chair, Maddox hears the cries of Mac, Aquamarine's mother taunts her, and Wyatt sees the judge sentencing him to prison. A warming sensation on his wrist reminds him that his father's watch is still with him, as is his father's spirit, and Wyatt is able to resist the despair. Helping the others come out of the grip of sorrow, Wyatt and the rest of the pilots make for the temple. Once inside they must fight man eating socks...yes, really. Aquamarine handles the socks with little issue and things are looking up. Until the zombies from Roanoke show up. These prove slightly more tricky to deal with but Maddox taunts them into submission. Heading toward where they believe the artifact to be housed, the group is confronted by an Atlantean who tells them they do not belong there. They engage in combat and manage to take the sea man's head off. Finally reaching the vault inside the temple, a lone Knight Templar attempts to stop them...but dies of a heart attack once Jenika glows and levitates for him. The artifact is a simple wooden chalice aka a holy grail which per TOM is needed not only for the device they must build, but also to return Thomas to his body. As the others begin to study it, the island shakes terribly and Jenika spies a cardboard box in the corner. In it she finds army medals, a 1960s yearbook, and a photograph of Jebediah, Bruno, Colonel Jaxun, Nick Krieger, and Dr. Simon Lane with the words "Fire Base Valley Forge, Vietnam 1974". The artifact examined, the world goes to white light and the pilots come out of their pods. Bruno marches over carrying a machine gun. "You better remember who and what you're fighting for!" he barks. An assault team is on the way and it is time to move.