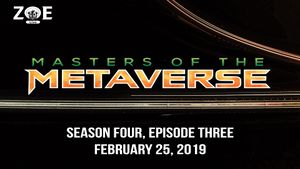 Under the dome of Sentinel City, a being known as The Chronicler has become trapped in an endless loop of reality. This is strange for a number of reasons, not least of which is because she should not be real. The story, it seems, is stuck. In the first cycle, Butch and Bombshell are fighting crime...though Butch is reluctant to do so. He doesn't want to do this any more, in spite of Bombshell's prodding. The Chronicler watches as this sequence of events happens over and over and over again. Finally, she decides to try and help. She spies her chance when Butch and Molly have an argument in Joe's Diner, Molly dismissing Butch's concerns over a conspiracy happening to make every day the same. Hollywood distracts Molly while The Chronicler makes her way outside to speak with Butch, encouraging him to continue with his search for answers. Another hundred years pass with no change. Then one day, The Chronicler bumps into a young woman and is flooded with memories. This woman, Mary Beth, lived outside the dome. She was part of a search and rescue team, looking for survivors after the nuclear blasts destroyed everything. She was enveloped in the remains of the cloak of The Shroud and was sent into the dome at the command of Cytron, who sent word to Migraine. Mary Beth meets her best friend, Abbi, in Joe's Diner and the two discuss their days. Several cycles pass, each one bringing a new role to Mary Beth. In one she is a bank teller who is killed during a villain attack when bullets ricochet off Butch. Once the fight is won Butch retreats to Joe's Diner where he commiserates with Hollywood and The Chronicler. He does not want to be a hero nor does he believe himself to be one. More cycles pass, this time with Butch being pummeled and crash landing in Mary Beth's apartment. She hides him from the villains while Bombshell takes care of most of them. Butch regains consciousness and manages to take care of those that remain. He and Mary Beth go to Joe's Diner and talk. Hollywood directs them to The Chronicler who offers some further clues to Butch, who is beginning to feel different...like there is a voice inside of him giving him focus. In the next cycle, Mary Beth has become the super villain Lady Veil. Along with her sidekick, Rita Riot, she is attempting to complete her evil plot when Butch and Bombshell arrive. A fight breaks out and the heroes get the drop on Lady Veil. Abbi/Rita Riot becomes enraged and attacks Butch with a Fury Punch. As she strikes, their eyes meet and they both remember everything. Mount Rushmore, all the cycles, Crash, Andi, everything. Another loop resets but this one ends with the dome coming down. The Chronicler fades back to where she came from as the residents of Sentinel City grapple with what comes next.