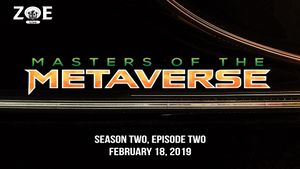 On the run from The Wild Hunt, the group meets up with Jenika and uncovers hidden secrets about the Fae. Upon meeting The Iron King a terrible choice must be made, and Ronald reveals a part of his past.

Outside the methods, Crash suddenly alerts Jenika to a problem. Something has happened to Ronald in the Metaverse and he is now dying. Jenika enters the first available pod and finds herself inserted into the avatar of The Whisper, a fae of the Summer Court sent to kill the Wayfarer and her party. Jenika manages to rest control away from her avatar, with some timely intervention from the Metaverse, and the group continues in their rapid escape from The Wild Hunt. However, Jack isn't doing so well and it soon becomes apparent that something will have to be done. With the use of some nano wasp technology, and Gina's ability to cold forge steel, Jack is outfitted with a brand new cold iron arm. However, Ronald is now in control and he seems reluctant to talk about what happened during his time as The Blacksmith. The party finally reaches the city of the Iron King. They are surprised to find that not only is a a fairly nondescript young man in his early twenties, as well as being Scottish, but he is also working as a spy for the Winter Court. He was told that Gina would not survive the journey and is both delighted and surprised to find that that is not the case. Unfortunately, the Wild Hunt is at the gates, and the king takes his leave to go and attempt to get them to leave. Once alone, the group decides that in order to save Gina and every other human on the planet, they must help the Summer Court take control of the playing board. This means that they must kill The Hunter, the leader of the Wild Hunt, which will enrage the queen and draw her out. Unfortunately, the only way to harm The Hunter is to true name him, something that only The Blacksmith can do. Ronald refuses, saying that every time Jack puts on the hood he loses a piece of himself to whatever the creature inside the cloak is. Ronald reveals that he has lost avatars before and he is not willing to go through that again. When pressed, Ronald tells the others that if they try they can reach out with their minds and sense their past avatars. He tells them of how Rhodes ripped him out of his avatar and forced him to watch as the avatar died. Several ideas of alternative plans are thrown out but none of them stick. Finally, they begin to make their way to the front gates to see what is going on. Once there, they see that The Hunter and The Wild Hunt are drawing closer. Jenika accidentally taunts them with a flipping knife, while the others are trying to build a murder car, and the horde attacks. Thomas, taking matters into his own hands, forces Ronald back over to avatar and Jack dons the hood of The Blacksmith once again. The others wage battle against The Hunter as Thomas pulls a scroll from a loot box and sends a message to Crash, asking him to pull Ronald out of the Metaverse and his avatar. Before he sends the message however, he hears the voice of a man by his ear. It is Rhodes who tells Thomas that "This is your one." before he disappears. The message sent, Jack true names The Hunter and drops dead...Ronald pulled from his body while full avatar. The others fight and manage to severely wound the now named Baldur. Thomas runs him over in his murder van and is surprised when he hears a knock on the door.