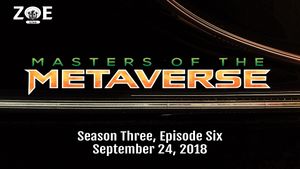 Flashing back several months in the past, Nick attempts to reunite with his missing teammates after the events on Xerates Island. Along the way he learns some disturbing information about a possible mole in the group and something called Project: Metaverse...

Summary:
Flashing back several months, we join Nick who is searching for his missing friends. After Xerates' island sank, Nick hid inside the mind of Jebediah Lexington and managed to escape. Commandeering a new body he found his way back to The Founders, only to be met with a chilly response. Frustrated with their lack of trust and cooperation, Nick slipped his leash and went on the run. He began receiving mysterious text messages on a burner phone that suddenly appeared, messages from an anonymous source who wants to help him recover his missing team. He enters a coffee shop and mets two men, Patric and Bruno. Patric is a demolitions expert while Bruno is ex-military/spec ops...and seems vaguely familiar to Nick. These men have been hired to help him rescue his friends and the three set off to a Program safe house that Nick found in Jeb's memories. Arriving at the safe house, Nick uncovers the armory which they raid. At dawn, pulling over to a roadside diner for breakfast, Nick and the others make plans. It isn't longer, however, before several familiar black SUVs pull into the parking lot. The trio makes a run for it and manages to pull out in front of them. Back on the road, the men are soon being followed by several black SUVs which they manages to evade for a time before they hear the sound of approaching helicopters. Nick commandeers one of the pilots and causes the chopper to crash into its oncoming backup. Patric and Bruno are stunned as the men continue their game of cat and mouse. Nick has received a message on his phone saying that the pilots will arrive in one week's time in New York City, so the group heads there. Arriving in the city, they get the address of a Founder's safe house. Approaching the front door, they hear the sounds of muffled gun fire and discover agents from The Program and The Founders in a protracted gun fight. Nick, Patric, and Bruno intervene and help the Founder's agents to escape, retrieving a thumb drive from one of them first. Nick then questions the renaming Program agent who reveals the existence of something called Project: Metaverse. Patric fills Nick in on the details, as well as pulling up information about the missing pilots who all went missing at the same time, about a year and a half ago. It is also discovered that pilots from Project: Metaverse have connections back to the original pilots. Wyatt Maxwell was in the same prison that Jenika worked in, Maddox McPhernon worked security for Aquamarine, and Brony was the rival of Crash. Only Andi Jaymes has limited available information, almost like someone made sure it couldn't be found. The thumb drive they obtained reveals a report from Tessa to the Founders, stating that her informant TOM has come across information that either Rosie, Jenika, Aquamarine, Thomas, Crash, or Nick are compromised and actually working for The Program. Nick struggles to comprehend all this when he has a flash of memory. Standing in a room with a drink and a cigar, talking to a much younger Jebediah who says "So you see Mr. Krieger, this is exactly what we need to do." His phone buzzes with a grainy picture of Rosie standing with Nick in Times Square, dated 26 hours ago. After some research they discover that another Nick Krieger has a hotel room downtown. Arriving outside the hotel, Nick convinces Patric to rig him to explode just in case...as a cab pulls up and another Nick gets out and goes into the hotel. A few minutes later, several black SUVs pull up and a tactical team enters the building. Nick approaches the front dest and obtains a room key, while also using the courtesy phone to call the hotel room and warn the other Nick of the impending attack. Nick, Patric, and Bruno take the stairs and make their way up, fighting off Program goons. They make it to the hallway outside Nick's room and the door opens, revealing a second Nick who immediately starts to flee. As Patric and Bruno attempt to deal with the Program team, Nick jumps into other Nick's mind to try and convince him to come with them. Nick refuses, insisting that it's all a Program or Founders trick. He tells Nick to meet him at the mountain with faces if he really wants to learn more, and then leaps out of his body. Nick is left to flee with Patric and Bruno as emergency services close in. His phone buzzes once more when a text from the anonymous number. "Pilots arrive tomorrow. One is compromised, trust no one."