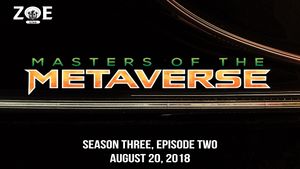 As the pilots struggle with the reality of The Arena, inside Sentinel City something is amiss...and Butch Baker, Hex Destiny, and Bombshell 3.0 need to find out what it is.

Summary:
Its been a year since the final showdown with Dr. Migraine. Butch has married Molly, Hex and Bombshell has new jobs, and everyone has moved on. Well, not everyone. Still obsessed with finding out the truth behind the dome, Butch continues to question the truth of his reality. He also is talking in his sleep, leading Molly to ask him who Abigail is but he can't remember. During a party that night, to celebrate the return of The Next American Sentinel, Hex declares her belief in Butch and his assertion that things are not as they seem...and is immediately shot. The team scrambles to find the assailant, who is revealed to be none other then Griefer. Who turns out to be an android. Feeling things are getting stranger, and with reality winking in an out every once in a while, the group heads to the hospital to visit Riptide who has chosen today to finally wake up from his coma. Riptide provides no insight and the team notices more strange things as they travel back home. They are set upon but Woo Girls, and Naked Mole Rats, and it is during this encounter that the system resets and they finally catch a glimpse of their reality. They are being held captive by Dr. Migraine and Riptide, kept asleep in a world that doesn't exist. In a desperate attempt to wake up, Butch allows himself to be shocked by HAL. His body spasms and falls to the ground in the real world, as Bombshell 3.0 opens her eyes.