Episode One Hundred And Sixteen: Rumors, Truths, And Myths 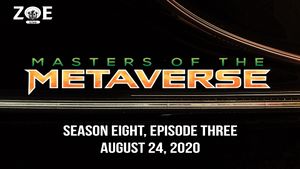 The pilots dive deeper into the rumors and conspiracies of this strange time in the Metaverse.

The pilots have been on the run for four days and find the countryside in ruins. Rumors are spreading that Maximillian I is in league with the devil and that Agrippa is the one who has made it so. They finally make it to a village that hasn't been utterly destroyed. Coming upon a farmhouse, the pilots steal some clothes and listen to some rumors...specifically about Agrippa. And then the mob with pitchforks shows up. The pilots grab some horses and take off, soon shaking their pursuers. They come upon a cart and Crash pulls it to a halt. Unfortunately the driver is killed in the process...but the driver seems to be a grave robber of some kind. At the very least, he appears to not be who he is pretending to be. As they are investigating...the angry mob shows up. Taking off with the cart, they finally out pace them and seem to have gotten rid of them at last. They come upon some Ottomans attacking a family. Jenika takes off in indignation. She stabs one of the attackers while the others swarm the wagon. As Andi breaks a jaw and Bruno takes off a head, Jenika stabs someone else. Crash then pokes someone in the eyes and shoots lightning at their crotch. They grab the remaining assailants and attempt to interrogate them. They find out that the cousin of Maximillian, Johann, is holding out against the Pope and they are laying siege against him in the north. Apparently the Holy Roman Emperor and the Pope are at odds. The pilots head off to Johann's castle where they use several levels of super powers to get over the walls. Heading inside to the keep, they find a sleeping Johann and fill him in on what has been happening. He also lets them know that the Pope plans to give the Holy Roman Empire to Henry the Eighth. It seems like the Pope is likely an avatar being controlled by another MetaPilot. Bells suddenly start ringing as the Ottomans begin to attack. Crash summons a storm while Jenika turns the water into giant hail. Bruno summons an earthquake to damage the pathway the enemy soldiers are using. The first wave of the siege has been stopped and the pilots take the chance to bath and rest. In the morning they arm themselves with chainmail and breakfast. There is a sudden explosion outside as canon fire echoes from the cliffs behind the castle. Ottomans and Swiss Guards have swarmed the courtyard. The pilots leap into the fray and begin laying waste to the attackers. And then the Cardinal shows up. He calls for the surrender of the castle and orders his men to arrest the pilots. The Pope wants them alive.