Difference between revisions of "Episode 115 Streaming"

Episode One Hundred And Fifteen: Time Is Not On Your Side 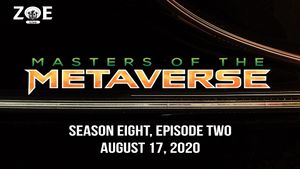 The pilots return to a past Metaverse where time is no longer what it once was.

Three days after Crash, Andi, and the others have returned to Archangel Base. The four captured rogue pilots have been contained and identified, none of whom are particularly nice people. They also were not metapilots the last time anyone saw them. The group attempts to get one of the prisoners to talk. He tells them that his powers come from boxes. He also offers to tell them where the other pilots are but Crash turns him down. He says that the name Crash is looking for is with the boxes. So Crash then punches him in the throat. The pilot resists the urge for oxygen and Jenika performs an emergency tracheotomy. When he comes to he reveals that everyone had a job to do. The hostages were never meant to live and each pilot was assigned to another metapilot to kill. They were employed by someone they never saw. There is a ship out at sea which contains the boxes. They did "training in virtual reality". They assumed it was a government job. He overheard the techs talking about "Project: Metaverse" and making up for past mistakes. He got the impression that not everyone was working willingly and that everyone was very scared. When the pilots try to find the ship with the pods, they are told that it went down with all hands six weeks ago near New Zealand. While Crash and Bruno hash out some differences, Patrick comes in and lets them know that Zenda is here to see Crash. He lets them know that someone has altered a timeline in a Metaverse. While he doesn't know how or why, and he can't fix it himself, he asks Crash and the others to do it for him. Apparently it is the world of the Weird West. And if the timeline isn't fixed, the avatars that they know will not exist. He also tells them that there are currently about 800 pilots on Prime. There were others but Zenda arrested 314. The pilots head into the Metaverse, to the year 1512 aka The Renaissance. They find themselves in Germany and there are peace talks afoot. The pilots begin to come to grips with their avatars and the complex political machinations of this world. Finally everyone retires for the night to get some sleep and plot in private. In the middle of the night, each of the pilots have their guards attacked and murdered and then they are each attacked. It seems that they are not the only ones, as many political figures are under attack. It soon becomes clear that the assassins are Turkish, speaking a dialect that has roots in Persia. And the castle is also under attack...and the gates are wide open. The pilots manage to quickly take care of each of their personal kill squads while Jenika leads a horse off a cliff. But in doing so, she sees that these are the Pope's men who are attacking...literally everyone. The pilots manage to escape the castle just in time and regroup to try and figure out just what the heck is going on.