Episode One Hundred And Thirteen: The Death Of A Dream 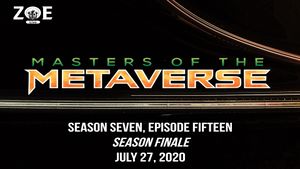 Andi approaches the bench and finds Maddox sitting there. Wyatt resists the temptation to talk to her, claiming that she is a nightmare and nothing more. Crash goes into the coffee shop while Andi, Wyatt, and Aquamarine try to figure out what is going on. Wyatt becomes angrier and angrier at the idea of Maddox being used in this manner by the nightmare. The group heads off for a walk and the scene shifts to a prison. Maddox is still with them and Crash attempts to figure out how Maddox is here. Heading into the next room, they find Rita Riot on a rampage slaughtering guards and prisoners with a cartoonish version of TOM floating behind her. Rita turns and then charges at the group. Crash prepares to hug her as Wyatt determines that the version of TOM is completely fake. Andi moves to hug TOM to death but he turns into Butch. Crash grabs Rita and attempts to calm her. Aquamarine tries to help Andi feel the connection to the Metaverse while attempting to assist Crash in holding Rita. Maddox also lends a hand in holding down Rita. Crash head butts Rita and she goes limp. Bobby Maxwell appears and tells Wyatt that everything is all his fault. Wyatt pushes back and takes control, owning his mistakes of the past, rejecting the idea of Maddox being his fault. Bobby shifts into the form of Harvester. Wyatt throat punches him into nothing. The group moves off and the scene shifts to Africa. Andi watches Bruno die in her arms as he tells her she wasn't worth it. Dozens of Coles step out pointing guns at them. Cole opens fire, striking several of the pilots. Crash uses his kinetic powers and causes all the Coles to blow up like water balloons. Wyatt notices that not only does Maddox continue to act like Maddox but that she looks even more real than the other pieces of the nightmare. There are also traces of golden threads around her, almost like they are holding her together. The scene shifts to Sentinel City. Andi is beating Butch to death again, Lady Veil attacks Aquamarine, Dr. Migraine berates Crash, and Wyatt stands beside Balthazar...tempting him to use black magic. Crash rebuffs Migraine's argument while Aquamarine attempts to comfort Lady Veil. Wyatt rejects the base temptation as Migraine continues to plead with Crash. The scene shifts again, this time to the lair of Kronos. Balthazar summons ghostly legions to hold the pilots and only Maddox is able to resist. Maddox spits out a razor blade and uses it to cut Balthazar's robe into handcuffs which she uses to bind his hands. Andi breaks free and uses her empathy to relink their past avatars to themselves. Rita strikes Andi but she also strikes herself due to the empathy. Aqua wraps up Lady Veil and apologizes to her former avatar. Crash picks up Rita and throws her at Butch. He then takes over the ghosts and makes them dance. Kronos throws Rita back at Crash but then forgets that he was ever there. Wyatt tries to turn the nightmare against itself, attempting to convince Butch to fight Kronos. Golden threads suddenly wind their way up Butch and he takes on a truer form, turning against Kronos and fighting back. Maddox puts Kronos into a sleeper hold as Andi brings out a mirror and holds it up to Kronos. Cracks cover Kronos...the exact opposite of what they just saw happen to Butch. Aqua brings Lady Veil over to the mirror and she begins to crack as well...and then break apart completely. Crash then summons a pair of rocket boots and rides Lady Veil into Kronos and Balthazar. The scene shifts again to a burning forest and a bork village. The borks cry out, blaming Andi and Wyatt for what happened to them. Maddox assures Wyatt and Andi that while they made mistakes, these mistakes are not all that define them. Crash calls forth the rain and puts out the fires. Wyatt finally realizes that Maddox is real as the others attempt to help the poisoned borks. The pilots break into song while Crash administers first aid. The scene shifts to the sands of Arena. The Nightmare offers them a deal. Leave now and for the rest of their lives, he will leave their world alone. The pilots refuse and the Nightmare fades away. Before them stand the enemies of their past, ready to fight. As Crash and Wyatt run interference, Andi, Aqua, and Maddox team up to pull Monday out of the grasp of the Nightmare using the golden threads holding Maddox together. The scene begins to go dark. They hear Zenda telling the others that he can't find them, and neither can Monday. Some unknown amount of time later, the pilots wake up on the Reliance. The ship has landed and the pilots disembark. Archangel base is abandoned.