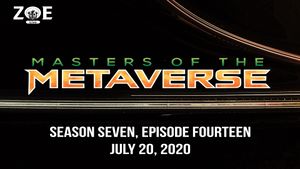 Entering the nightmare in search of Monday, the pilots must face their darkest fears.

Zenda appears and tells the pilots that he's had to put Jonathan in stasis for his own good. He tells them that Monday is still alive but that he can't find her. He tells them to go to Pierce and use his ship in order to travel to the nightmare where Monday is being held. Crash travels along golden threads and they all surface in a tank of icy water. Andi is now no one, Crash is his younger self, Aquamarine is her yogini personality, and Wyatt is a convict. They don't remember each other or Monday. Entering an elevator, they come out into a field with a strange house in it. The ground starts rumbling and a twenty foot man comes out looking for Crash. It's Cole and Crash takes off. Aquamarine runs after him as Andi leaps onto his back, reminding Cole over and over that he is dead. Aquamarine also tackles Cole and the two of them hold him down. The world shifts and they are all suddenly in a backyard being tackled by Crash's Dad in a football game. The scene shifts again, this time to a dojo where Cole is waiting to teach Crash how to take a punch...but this time Crash and his friends are ready. As Crash and Andi use the powers of punching and knives, Aquamarine seduces one of the Cole's. Four more Coles appear and start beating Crash. Crash fights back and the scene shifts again. This time they're in an office, Butch Baker's office. He asks Crash why he keeps coming in and ruining his life. The scene shifts again, this time to a house that Aquamarine knows. Her grandmother comes out and belittles Aqua, who gets smaller and smaller. But with the help of her friends, Aquamarine is able to stand up to the nightmare version of her grandmother. The scene shifts again, this time to a street where people are losing their homes and all their possessions thanks to Aquamarine. The people start screaming at her and throwing bottles. Aquamarine stands up and performs a rousing and inspiring song. The crowd continues to throw rocks until finally Crash shields her. Her friends rally around her and encourage her to fight back. The scene shifts...just in time for Andi to imagine a T-rex with a saddle on it. Andi jumps on its back and starts to ride it while Wyatt kneecaps it and Crash kicks it. Aquamarine sings it a lullaby and the T Rex falls asleep. Throwing the dinosaur off into the distance, the group moves on and finds themselves among a crowd of people who are all listening to a version of Sapphire. Aquamarine resists the urge to fall for the nightmare's taunts but Sapphire turns into the master of Nightmares and demands that the crowd attacks the pilots. Crash starts punching and Aquamarine creates a time bubble around the angry mob. Wyatt unravels someone at the seams and belittles their existence. Andi holds up a mirror to the crowd and sees them to be nothing but puppets. The fight stops and the scene shifts. They are now in a room of statues, statues of all the heroes and avatars they know and love. They hear the sounds of someone walking around and dusting. It's an old woman and she doesn't remember who she is or the stories of the statues around her. Andi tells her the story of Butch and Wyatt relates the life of Balthazar. The pilots tell her about the heroes around her. Suddenly she becomes afraid and disappears with a pop. Dark ooze spills forth and turns the statues against them. Wyatt pulls the dark essence from the statues as Aquamarine opens time and Andi uses her empathy to call forth her friends into those statues. They turn to flesh and fight against the dark heroes as Crash pulls forth the head of Medusa and the summoned heroes return from whence they came. The scene suddenly shifts and now everyone is standing in Meta End. The Nightmare Master taunts them briefly and then the scene shifts to a coffee shop. Andi is gettin fired...again. Something is very familiar about the scene...this is the day Andi was recruited to Project: Metaverse.