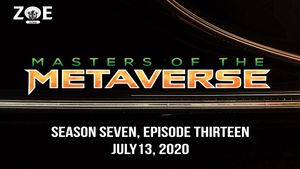 At the heart of the Boris program, new truths are revealed...and things take a dire turn.

On the island, the pilots find a warehouse...and Crash finds a golden thread. Only he can see this thread, not his avatar, and he follows it to a telephone pole which holds a grainy picture of TOM and a phone number. Crash returns to his friends and shares what he has learned. It seems that TOM either returned to this world after Andi and the others had left, or a piece of him had found its way back. Crash thinks that TOM was somehow kidnapped by Boris and forced to use his replication ability to help Boris. Looking up Boris in a phonebook, they soon find one located in a penitentiary nearby. They also find a number to a Thunder Laboratories, but it has been disconnected. Bruno calls the penitentiary and talks to Boris. As they set out toward the island, a thunderstorm starts. Approaching the final island, and the penitentiary, they encounter mines in the water. The pilots search the boat and find an emergency raft. Everyone loads into the SUV and Crash and Andi get the team over to the island. Once there they hijack themselves a UPS truck. They kill some Boris hobos, gain a star, and climb up a building. A helicopter moves in for surveillance but everyone manages to hide carefully and avoid detection. The team makes their way across the rooftops towards the spawn zone. As they travel, their star rating disappears. Moving into the garage, the team encounters more Boris. Andi takes a major hit but comes up fighting. As the rest of the pilots start taking out the Boris, new ones spawn in...each one wearing a Hawaiian shirt before they put on their own uniforms. A new Boris enters the spawn room and says "Boris is here to serve". And then the Boris Mech shows up. Crash deduces that the Boris inside the mech is the actual true Boris, not a copy. Pushing forward, they find an almost white room...containing a TOM shard who is making Borises. Crash pulls him free and TOM comes to...and with a wave of his hand turns everything into a white room. Then he remakes the world into a virtual Eden. He is the entirety of the program...and he remembers Crash from when he was quite young. Apparently, Colonel Jaxun and others tried to take over and control this program world. And Crash spent a great deal of time in this program as a child. The version of TOM they had been interacting with was a shard from the very beginning. Apparently it was Nick who corrupted the environment in the first place. TOM and Harvester are nightmares...and the pilots and their avatars are dreams. But who are the dreamers? Suddenly Jonathan Rhodes appears. He's distraught because Monday is gone, taken by the oil slicks. It seems that they are planning to use her connections to everything to spread terror. He asks them to help him. To find Monday.