Episode One Hundred And Ten: Sandbox 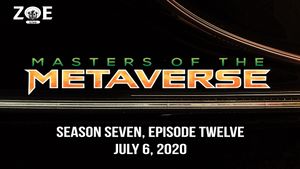 Returning to a world that they once knew, the pilots learn that video games are a little tougher than expected!

The pilots had back to the first world that Project: Metaverse ever visited. The first world that they harmed. Inside this video game type world, most of the avatars have been killed...thanks to Project: Metaverse. And now one of the villains in the game is spawning himself until no one will be left except Boris. The team gathers in a local gym which is now a freedom force safe house. They decide to head out to Amnesty Island in the hopes of trying to meet up with Bruno, whose avatar is currently under cover. Reaching the top of the building, the group spots Bruno (currently disguised as a hot dog vendor) and receives their objectives from Boris. They have to raise their star rating in order to get the things they need to get over to Amnesty Island. So they hatch a plan. As Crash causes a distraction, John Stone steals an SUV. Crash zip lines into the car and drives off with John. Bruno joins them soon after, followed by Andi. Heading off, the pilots hit the highway. Crash questions Andi about her time with TOM, pointing out that its a little weird that Boris is replicating himself much the same way that TOM later did. Coming to a road block, Crash gets ready to make a ruckus while Bruno blows up a red barrel. Their star rating goes up to one star and the Borises begin to prepare for an incoming assault. John Stone tries to play it cool but the Borises see through his...non Boris nature. Star rating goes up to two and the fight is on. Bruno and Crash each take out several opponents as Andi and John Stone use an SUV and a grappling hook to clothesline several Borises. Bruno scoops up a rifle and opens fire. Crash and Andi jump out of the car to attack with rifle butts and knives. The star rating is now up to three stars...and now the SUVS and helicopters show up. John speeds off and ramps it over a barricade. Crash teleports himself into the pilot seat of the helicopter. Andi street surfs along, keeping pace with the others. Bruno and John take out the pursing vehicles, as Crash takes out the newly arrived helicopters. The star rating is not four and they are coming by land, sea, and air. John Stone launches the car off the side of the bridge and boards a patrol boat..with an SUV. Crash heads to the tank and attempts to make himself a very tempting target. Andi jumps on board said tank and cuts her way inside. Of course the machine gun fire puts a little bit of a damper on things. John Stone and Bruno attack the Borises on the boat while Crash punches a tank like a bank. Andi slices and dices, and the star rating goes up to five. John heads to ram one of the approaching boats, while shooting, even as more enemies spawn and head for the pilots. Bruno channels Lothar, and tries to summon elemental magic to slam the ships together by manipulating the waves themselves. Crash opens fire on the tanks while Andi starts driving the tank toward the island. Unfortunately it gets shot up pretty quickly and is no longer functional. Bruno blows up another boat as Crash and Andi make a run for John's boat. John manages to land on Amnesty Island as the star level slowly drops back down to zero.