Difference between revisions of "Episode 109 Streaming"

Episode One Hundred And Nine: Kitty Hawks And Werewolves

In the final push to save the legends of the Wonky West, the pilots take to the sky and the bush. 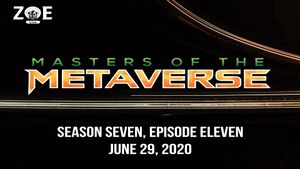 After stealing a train, the group heads back to find the cabin where Mark Twain was supposed to be, completely destroyed. The scene isn't quite right however, and the team resolves to launch a daring rescue mission. Heading toward Saint Louis, Brony's avatar recalls that Samuel Clemens has drunk from the Fountain Of Youth and is immortal. John Stone ascertains that they are two days behind the attackers and so they set out quickly...and almost crash lands thanks to Rosie's driving. Arriving in St. Louis, the team heads to the local jail. Crash pretends to be a woman, not well, and seduces the guards. The figure out that these are members of Custer's elite unit. Arming themselves, they head into the jail. Posing as Custer's guards, they start to question the prisoners, who turn out to be Wilbur and Orville Wright. Unfortunately, the clever disguises of Canadians don't hold up to scrutiny. A fight breaks out and Rosie turns two guards into beavers while Brony chops one in half...and then the dam breaks and a flood of beavers covers the town. Yes, really. And then the Beaver-Nado happens. As the dust and bushes clear, the Wright brothers let the pilots know that Mark Twain has been moved. They have a plan to rescue him but it requires building a new kind of flying machine, and freeing the people of Andersonville. Rosie figures out how to build more versions of the flying machine, and she and Crash make two machines of their own. Rosie and Brony take off while Crash and John have a foot race. Landing in Andersonville, Crash lands in the middle of a group of guards. Said guards get a cigarette in their faces and a beaver place thrown at their heads. Making their way inside the prison, the pilots find that everything is powered by electricity. Moving to the basement, they find many people being worked on...their human parts being replaced by machine ones. The next room holds a calmly smoking Custer...waiting for them. There are also automatons in the corners of the room, clearly some kind of ambush. Then Crash blows up the stairwell. Brony starts spinning with his axe, heading for Custer. John smashes golems with his giant hammer while Rosie sends tendrils of wood wrapping around Custer. Crash channels Harzoul and raises the dead henchmen, calling them to consume Custer. Crash teleports inside of a golem Edison and, after taking note of the insides, blows it up from the inside out. Edison is nearly dead but he agrees to tell them where Mark Twain is...if they save him. Crash stops the bleeding and drags Edison down to the basement...where they find the missing legends. Gatling, Dickinson, Tesla, Oakley, the list goes on. And in one cell they find Mark Twain. He's pleased. Things have gone according to plan. There is more hope in this world, more legends and stories. More chance for the Spirit Of The West to survive.