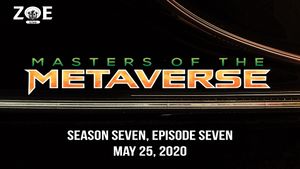 The pilots must make a final stand to bring hope to the world of 768.

The team attempts to convince Dr Presto Change-O to let them have Bob Baker and TiTOM. It appears that Bob Baker is no longer able to contain the Titan Force because he doesn't believe that he is worthy of it. Crash suggests that Andi imbue one of the doctor's assistants with some Titan juice for twenty-four hours while they manage to get away with the two people they want. Jenika pretends to mind control Bob into transferring power while Andi shoots a little juice into Dr. Presto Change-O. Bob Baker is released, as is TiTOM. Aquamarine returns to the group in time for TiTOM to come to. He remembers what happened on Mount Rushmore, back on 668, but not much else. He knows Andi Jaymes but he doesn't know that he is TOM. The pilots try to explain things to him and succeed...sort of. Heading back to Butch, Andi attempts to ask Bob what happened to Rita. He reacts to the name but is too groggy to say much. He begins to panic when he realizes when they are taking him to Butch. Butch blames Bob for Rita. They fought, Butch used his powers and Rita got in the way. Butch was preparing to join Hex Destiny and Bob tried to stop him. Butch attacked Bob and Rita stepped in the way...and died. Returning to Las Vegas, the group attempts to help Bob Baker believe in himself again so that he can be Titan. The Johnny Legions fly the group to Butch and deposit Bob in front of him. Butch begins to torture Bob but Andi steps in and imparts her memories of Butch and Abbi to him. She explains that without Butch's help, their story will end all over again. Butch breaks down and reveals that Hex already knows they are coming. There is only one way into the Fey Wyld and it's a trap. The entrance is in the ruins of Mount Rushmore and the pilots prepare with weapons, mind shields, and pep talks. Flying overhead, Rosie can sense a great deal of magic in the area. Crash bombs the crap out of it. Jenika senses that while there is no one in the area there are people who are able to sense them. She reaches out and finds that they are being spied on from the Fey Wyld. Suddenly the world shifts and fifty Bombshells attack. Aquamarine and Crash team up and use the powers of Titan to seduce all the Bombshells. As the Bombshells are stunned, Andi throws about a zillion demon blades into their lovestruck bodies. Jenika uses her abilities to attempt to convince all the Bombshells to become good. And then TiTOM unleashes ultra vision and destroys one Bombshell. The Fey Wyld opens and more heroes turned villains emerge to fight our pilots. Crash punches some people with explosives while Aquamarine convinces a few of them to reconsider their choices. TiTOM gets stabbed a bunch while people try to mind control the psychic or suck water out of the person made of clay. Andi opens fire and takes out another combatant. Rosie channels Hex and, in the guise if Tiger Queen, summons Mercy using Loki's magic. She uses the sword to stab Riptide while Jenika uses a Gatling Gun to blow people up more. TiTOM faces off against Shield Maiden just as Armor Guy shows up in his Titan busting armor. Andi takes out The Highlighter and Riptide while Jenika uses the power of surfing to open the door to the Fey Wyld. Crash pulls the Armor Guy armor from 668 and puts it on before shooting Armor Guy of 768 with the Midas gauntlet and turning his armor into gold...and then just shooting him. Rosie physically summons Hex Destiny to her. She places their heads together and casts a spell...know that Hex Is Hope. Rosie has changed the fate of this Metaverse and that they have brought hope to 768.