Difference between revisions of "Episode 104 Streaming"

Episode One Hundred And Four: The Butcher, The Baker, The Mutation Maker 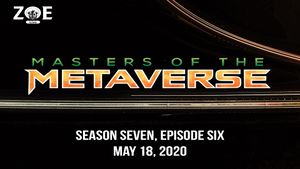 The team finds an old friend and a surprising secret comes to light.

Back in Dr. Dynamo's base, Johnny 33 has woken up. He reveals that Hex has taken Migraine into the Fey Wyld. Johnny happens to know the only other way in or rather the person who should know. Butch Baker. But no one has seen Butch for years, he doesn't leave his casino. The Steady Roller, as it is called, is the neutral ground in this ongoing feudal dispute. Technically Hex appointed Butch as Duke of Nevada but he doesn't seem to want to be involved. The last anyone heard of him was Hex asking him to deal with his uncle, Bob Baker aka Titan. Arriving at the casino, Crash enters and finds Johnny duplicates all over. The rest of the team joins him and finds that there are no powers allowed in the casino. Rosie seduces a Johnny and hears that Butch is in a bad way. Rosie uses her magic to disguise everyone as Johnny Legion and they make their way to the kitchen. Crash beckons his team in the walk-in...and shoots them with a shrink ray. They clamber onto the food tray being taken to Butch's penthouse. At the top of the casino, they find themselves in an open courtyard. There is a giant shark trying to roll a joint next to the pool who Crash recognizes as Mako. Empty beer cans litter the area and the cart is pushed to the side and left alone. The team makes a break for the couch without anyone seeing them. Andi suddenly senses a golden thread on her wrist, tugging her toward a door, which smells like a strawberry milkshake. Andi approaches the door and crawls underneath, finding a room covered in dust. The room is immaculate and clean, nothing is out of place. It has not been disturbed for a long time. The walls are covered with pictures of Kid Titan and Rita Riot, together and happy. But the room has not been touched in many years. Something is terribly wrong. In this world, Rita Riot took the punch from Titan. The group finds a disheveled Butch Baker in front of the television, eating chicken in front of the TV. Crash tells him that they are trying to get to the Fey Wyld and asks if he knows how to get there. Butch agrees to tell them if the team goes to Dr. Presto Change-O's lab and brings him Bob Baker. The team lands in Bogata and starts looking for the lab. Jenika channels Bombshell and finds the secret location. Rosie uses magic to create a distraction for security along with Jenika. Meanwhile Crash and Andi make their way to the door. After stealing some murder bikes, they set off into the deep jungle. And then the laser turrets start shooting. The team opens fire and destroys the turrets in quick order. Reaching the inner base, they find a force field in place. Jenika channels Professor North and uses science to bring down the walls. They find several dome shaped buildings and seven life signs...four of which are now heading toward them. They also happen to be flying, cybernetically modified gorillas. Crash adjusts the gravity for one and uses a super gun on another. Andi senses that the gorillas are unable to control their bodies and are in constant pain. Jenika retrieves Rosie from back at the base and brings her back to the others. Crash pulls out a baseball bat and dispatches another one. Andi climbs on the back of another and then humanely snaps his neck, channeling that to all the others. Jenika senses that there are only two beings left in the base, not the three that should be present. The team moves into the main building and the center of the lab. There they find Dr. Presto Change-O with two bodies in tubes. Andi uses her empathy and reaches inside. One is Bob Baker and one is Titan Tom...the same TOM who stood on Mount Rushmore and watched Butch step in the way.