Episode One Hundred And Three: A Legion Of Their Own 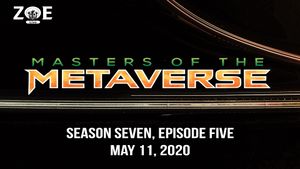 Crash is reunited with Andi, Jenika, Rosie, and Aquamarine. They leap into a world that mirrors one they know all too well, in an attempt to take the fight for the Metaverse to a new level.

Crash meets with Zenda and discusses what can be done against the dark entity. Luckily Crash wasn't infected during his exposure but that's the only good news Zenda can give to him. Crash decides that it's time to take a new tactic. Returning to the base, and to his friends, he proposes going to a Metaverse that is already terrible and make it into a better place. The first place to visit is the opposite of Sentinel City, its polar opposite. Jenika, Andi, Rosie, Crash, and Aquamarine leap into new avatars, villains in 668 turned heroes in this world. Hex Destiny is an evil empress who rules with an iron fist, and these villainous heroes are the world's best hope. Loading into a box truck, the group heads out to try and rescue Migraine. They make their way to the Armor Guy facility and prisoner holding area. They are instructed to find and rescue the person who was arrested with Migraine, although no one knows who that is. Jenika and Aquamarine approach the gates and stealth/distract their way in. As Jenika is dragged off to prison, and Aquamarine disappears inside, Crash and Andi jump the fence. Crash pulls Rosie through a portal and helps her up into the tower and to a better sniper nest. Back inside, Armor Guy speaks through a drone and gloats over his capture of Jenika's avatar. He plans on selling her to the highest bidder as it turns out. As she is dragged by, Jenika sees that there are three occupied cells. Meanwhile, Aquamarine finds a tiny vent to squeeze into. Crash and Andi begin their attempt to break into the prison level. Crash fixes on Jenika's position and then blows a hole in the ground. Coming out in the prison, Crash helps release some of the minions and Andi gets ready to kick some robot butt. Aquamarine gets into position and radios back to Crash, waiting for instructions. Breaking into the cells, Aquamarine finds Bandolier, sedated and on a stretcher. Outside, hundreds of drones and robots are gathering. Clearly they are preparing to stop the team from breaking out. Aquamarine identifies the remaining prisoners as a single nano wasp from Bombshell 4.0 and Johnny 33, a rogue Johnny Legion. The team frees Johnny and unplugs him from the sedation. Crash slips the nano wasp into his pocket, spotted only by Aquamarine. Carrying Johnny out by tiger, Andi creates a new distraction while Crash pulls a lightning gun from nowhere. Aquamarine throws two bombs, made of her own body, and destroys several robots. Rosie then channels Hex and Loki and appears as the dark empress, ordering the robots to stop. As they do, Crash summons a 742 gate for escape. While Rosie makes Armor Guy reconsider his poor life choices, the rest of the team makes an escape. Crash throws a sticky bomb on to the robots while Rosie shoots it. Waves of robots go up in flames as the imprisoned civilians make a run for it. The pilots make it safely back to their truck with Johnny 33 in tow. Waiting at the truck is Blue Streak, Armor Guy's right hand man. As Blue Streak makes a dive for Aquamarine, Rosie opens fire, seriously wounding Blue Streak. Crash pulls out a rocket launcher and follows suit. Aquamarine uses her body to encase a flying man while Jenika mind controls Blue Streak to pummel her own teammate into sand. Andi engages in a duel with one and then shoots her between the eyes. The pilots climb into the truck and escape, with Johnny and Blue Streak.