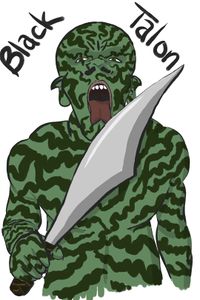 They get really mad if you call LL a "Lizard Wizard"

From the depths of their twisted valley, this monstrous clan prepares for its revenge against orcdom.

This clan lives in a mountainous valley and are descended from orcs exiled after a contagion left them marked. With black stripes and forked tongues, these orcs have spent the last centuries preparing an army and creating war machines under the guidance of a dimension-hopping battle mage, the Lizard Lord. The Orcs of the Black Talon view the Lizard Lord as a living god.

Most orcs do not realize the army and brewing hatred coming from the Orcs of Black Talon. Only the Fogwatchers and the Storm Crows are vaguely aware. Probably not a great sign.