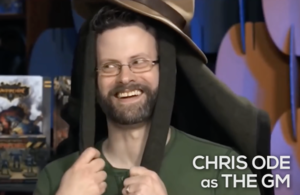 A true company man (at least on the surface), Thomas Wells has worked for the Program for some time. Twice a year he is sent in advance of metapod teams to scout for worlds with desirable abilities for harvest. He seems to have little concern for the broader motives of the program; when presented with an extended mission in a world of space princesses, he cheerfully accepted it as a vacation from his day job as a teacher. Thomas is also somehow involved with the disappearing children whom Tessa is searching for.

Thomas also has ties to Nick Krieger. He was his college roommate and got him killed in the metaverse when he pulled too much aggro.

When the safe house came under attack from The Program, Thomas was inside a metapod. The pod became damaged and Thomas was presumably killed, but not before his mind fused with the metapod thus making him a ghost in the machine.

Through interventions by TOM, Jenika, Rosie, Aquamarine, and The Holy Grail, Thomas has returned to his physical body. However, his mind still contains the knowledge that the Metaverse allowed him access to before.

One More Chance by Paxamo


Need To Know by Paxamo


Affairs Of The Heart And The Metaverse by Paxamo

The Death Of Hubris by Paxamo