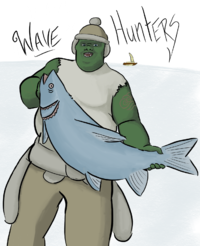 Sometimes, you stab a wave and get a fish!

Feared raiders and fearless settlers, the Wave Hunters have thrived in one of Fartherall's harshest environments--the polar seas.