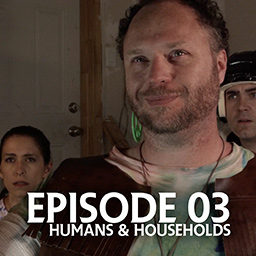 The remaining heroes plot to save their comrade guns blazing much to the host's dismay. The group realizes their party member is injured but fail in their first attempt to save her. Their failure makes them look to unlikely allies to assist in their vanquishing of the foe between them and their fallen companion. The quest is a success(kinda)but the heroes are called back to their real world responsibilities interrupting their mission.

There are call outs to Therin, Goddess of Light from The Gamers: Dorkness Rising and Mark's War cry "Blood, Death and Vengeance" from The Gamers before the heroes go to battle. Later "Let slip the dog of war" is heard, a reference to The Gamers: Hands of Fate.

No animals were hurt during filming.