Difference between revisions of "Storm Crows" 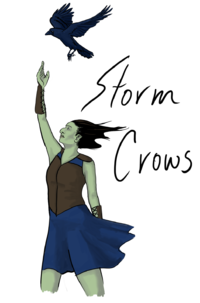 Their hair is always freshly windswept.
A reclusive clan of mountain-dwelling shamans, the Storm Crows will grant wisdom to those who seek them out--if they're willing to pay the price.

Living in temporary villages on high mountain peaks, the Storm Crows are a clan seers, sages, and shamans whose oracular powers are known throughout orcdom. Aeromancers in the clan are able to bend the wind and move the tribe from peak to peak, allowing their villages to vanish overnight without a trace.

As a Storm Crow comes of age, the young orc undergoes a ritual in which it bonds to a crow. Oracular gifts manifest after this. Their few hundred clan members are survival-oriented, and will use every part of their surroundings, even the bodies of their dead. To augur the future, Storm Crows must sacrifice one of their own and consume the flesh.

This clan has been known to send initiates to the Fogwatchers, to more deeply understand their powers and traditions. The Storm Crows have the most contact with the Black Spears, who consult with them regularly.