Difference between revisions of "Silver Wings" 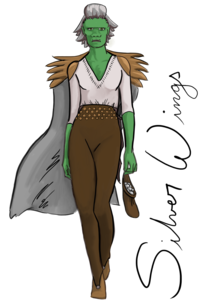 Honestly, what do you have to do to piss off a MOUNTAIN?

A cursed clan whose sins cost them their home, the Silver Wings have reinvented themselves as one of the world's premiere mercenary companies.

Once a mighty clan known as the Wall of Carols, this group was forced from their mountain home after That One Idiot angered the mountain spirit and got them all cursed. With only seventy-one left, the clan left the mountain and became nomadic, acquiring skills and learning to become mercenaries. Their name stems from the silver from payment, and the feathered wooden frames on their armor.

The Silver Wings take prisoners and forced laborers for indentured servants, but never slaves. They often marry outside of their own numbers, leading to a good number of half orcs. Each mercenary group has seventy-one members, and all must learn to fight with some exceptions for bards.