Difference between revisions of "Rook clan" 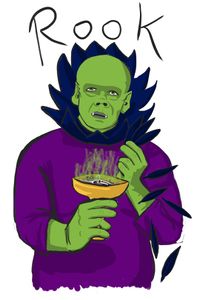 Once a great clan of kings and warriors, now scattered to the winds.

Their name is derived from the word "ruhairk" (toxin), which is what the ancestors once said before dying as experimental food-testers for the Underkings. A human bard mistook their name for the name of a carrion bird that was attracted to the blood bath the Ruhairk left on a battlefield after the Red Exodus, leading to this clan being called the "Rook."

The Rule of the High Kings marked a generally peaceful time in Orcish history, when any king could not ascend the throne without drinking toxic sludge from the Ruhairk Chalice (and surviving, presumably). The Rule of High Kings ended with the "Month of Red-Black Feathers," in which thirteen regicides took place in four weeks. After the month of Red-Black Feathers, groups retreated to their battle towers.

Rook Clan numbers are unknown, but the scattered Rook Clan may pose a serious threat to other great clans if ever united.

They harbored dwarves once (after they drank from the Ruhairk Chalice). This has made a lot of orcs very angry and is widely regarded as a bad move.