Difference between revisions of "Metaverse:Tessa" 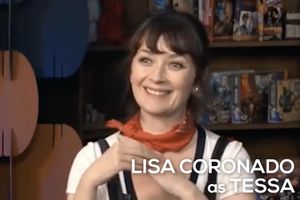 It is unknown if Tessa Wallace is or ever was an employee of the metapilot Program. If she is employed by them, her loyalties and motives remain murky.

She was first seen attempting to help retrieve Nick Krieger from his avatar after discovering that rum was part of the solution, but disappeared abruptly.

She appeared again a few months later, when the team were sent to a world of space princesses. An as yet unknown ally contacted her outside the program facility, and drew her to the back of a truck. There, this ally told her she would be inserted into the team in place of its designated leader, and her duty was to masquerade as the rightful team leader and gain the team's trust. A metapod had been installed in the back of a truck, which she used to follow these directions.

To date, Tessa has indicated that she has two goals, both unknown to the primary team. The first is a quest for her father and her husband, both of whom have disappeared into the metaverse. The second is to seek the whereabouts of an unidentified group of children that are very important to her and her ally.