Difference between revisions of "JQ: Episode 02.09" 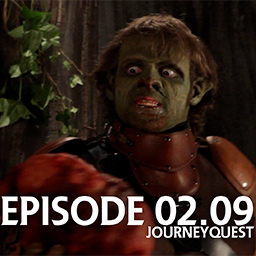 The Sword of Fighting celebrates victory. The assassin leave the party tied up and they plot in her absence. The orcs also celebrate victory. Wren makes a plea for the rights for her epic while Silver Tom gets real with her. Rilk tries to assist. The Assassin is delivered a message from the Wicked Kings. Perf fights the Sword while Nara fights the Assassin with a stunning revelation for Perf.

The credits for this episode feature an orcish war chant.