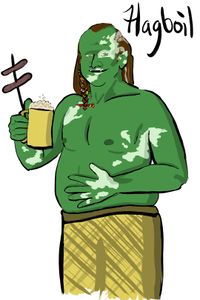 A clan of brewers and gourmands who only get violent when their food is criticized.

Founded by Ragzmogor the Green, the Hagboil clan is named after Ragzmogor's late wife, who he boiled alive after the clan accused her of witchcraft. The hagboil Clan still lives in a cave system with interconnected chambers, and also have surface housing in front of the cave.

To signify rank, members of this clan wear a bread interwoven with gems, bones, and other ornaments. Vitiligo and skin patterning are more common in the Hagboil clan than others, and is seen as a sign of good luck. Hagboil orcs are generally stocky, due to excessive alcohol intake.