From Zombie Orpheus Entertainment Wiki
Jump to navigation Jump to search
The printable version is no longer supported and may have rendering errors. Please update your browser bookmarks and please use the default browser print function instead. 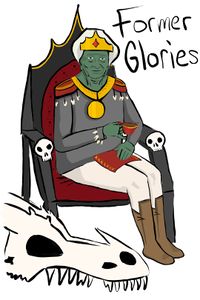 The reigning monarch will destroy you, after tea.

This polite--if somewhat stuffy--clan of former conquerers broods on its island, obsessed with the past.

The Former Glories live on a "damp, misty island at the edge of the known world," and these orcs consider themselves refined and noble. Once known as the Blazing Glories (Palettulrandulz), this clan had conquered much of orcdom, and even had colonies on sections of the Austral continent.

Over the past 150 years, the Former Glories have slowly lost a majority of their empire.

The Former Glories have a hereditary monarchy, currently ruled by an orcmaid for the past thirty years.