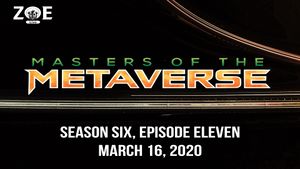 Patric, Mac, John Stone, and Thomas have to steal a moon and deal with some giant space bugs.

John Stone is pretty gooey after the ship crashing into the atmosphere when he and the rest of the group encounter a group of large, mutant cockroaches. Patric throws grenades, Thomas and John analyze, and revolvers are used. The drone is doused in pheromones and used to lead a large group of roaches away. It becomes clear that the bugs were laying a trap for the group and waiting to trap them and eat them. Making their way out of the roach trap, the men notice that they are essentially being herded toward a metal dome at the top of a hill. Inside of the dome is a massive ship, covered with corrosion. The ship has been there for more than 1000 years but it still appears to be in good condition. Patric sends the drone in to explore. John Stone jumps down and follows the drone's path to the ship walkway. The rest of the group follows and they soon come upon some bodies that died 1100 years ago. TOM informs John that the structure of ship is questionable and it might not survive takeoff. John relays this and then picks up eight approaching flying objects. More giant bugs. Thomas and Patric throw grenades while Mac attempts to not die while falling off a walkway. John Stone jumps down and manages to grab Mac before he plummets to his death. As the two of them are hanging over a pit of death, Patric and Thomas are dealing with an impending swarm of hundreds. Once Patric hears that Mac has been stabbed by a bug, he heads down toward his charge. John Stone catches both Patric and Thomas, and the group begins the trek down. At the bottom, Patric sets Mac's broken rib with his bare hand. Apparently he has super powers now? And they find out what is at the bottom of the cavern...bug eggs and larva. Because, what else would it be? The group finds a set of levers that power a turbine. Mac begins to push the levers and gets sprayed by crushed eggs for his trouble. Patric modifies a flamethrower out of a laser rifle. At this point two adult bugs emerge and swarm toward them. Patric and John blow up some babies as well as the larger bugs. The light suddenly comes on and everyone sees not only the massive amount of bugs covering the walls, but also the elevator that has just powered on. The team loads into the elevator and climbs the shaft to the ship. The door to the ship is now open and they make a dash for it. The ship is working but the tractor beam is offline. It was manually powered down and will have to be powered on again. Manually. Patric takes the controls and the ship lifts off. They break atmosphere and it's time to deal with the tractor beam. Naturally upon reaching engineering, they are confronted with clutches upon clutches of eggs. And then the parents show up. John beats a dude with another dude while Thomas gets a robot suit of armor. Patric swims across a lake of poop and bug guts while Thomas goes one on one with the queen, as is John Stone. Who gets stabbed for his trouble. Mac shoots a few bugs with a modified laser beam. Patric suddenly reappears and inputs the code to start up the tractor beam's grav drive. Thomas manages to behead the queen while Mac gets stabbed again. Patric jumps on the back of one and begins pulling the wings off its body. John Stone blows up the rest of the eggs and the team races back to the bridge. The rest of the transports have docked and it's time to grab a moon. With Patric piloting, Mac activates the tractor beam. With a moon in front of them as a shield, the resistance dives toward Luna. TOM suddenly alerts John Stone that his brother is on the moon below...