Difference between revisions of "Episode 92 Streaming" 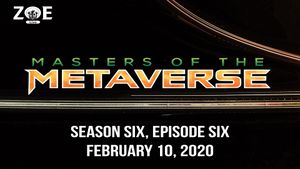 The pilots take on their greatest challenge yet as they attempt to find the source of the gates on an alien space station.

Crash and Aquamarine disable the auto destruct feature of the spaceship as well as all other auto functions. After some extra special safety precautions for P'reta, they finally take off. Reaching the outside of the space station, Crash has to attempt a manual docking maneuver. Rosie uses her link to Loki's illusion magic to disguise the ship and hide it from the enemy sight. Crash pilots a smooth landing and the group officially lands on the space station. Alarms start going off almost immediately and the team makes a run for it. The vacuum of space attempts to pull some of the smaller dinosaurs out but manage to only pull out a few of the guards. The rest engage their magna boots and manage to stay inside. Further down the hall the pilots run into another group or gun toting soldiers, although these look very much like space mounties. While Rosie distracts with poutine and snipes with hockey pucks, Aquamarine rants at them about her hat, and Crash shoots them in the neck.Andi parkours down the hallway and starts stabbing. She takes out five of them and Aquamarine disarms the remaining, very distracted, guard. They tie him up and Rosie takes the rest of the guns. Crash kills the final guard and their new friend from the planet base uses his own DNA to open the door. Climbing into the tram car they start to move down the track until gremlin robots start dropping into the car. Crash shoots them into oblivion as the train idle. Using his kinetic control, Crash gets them moving again. The team gets out and they launch the car ahead of them in the hopes of sending the guards on a wild goose chase. They finally reach the inner part of the base and their friend/prisoner offers to show them where the gates are. Before they head down, Crash builds a sentry gun to "guard" the barracks. Heading down, the doors won't open and it seems that their new friend has had his privileges revoked. The base is now in lockdown and no one is getting in or out. Crash senses that the room is full of people. The group starts taking apart the surveillance cameras while Crash builds a light saber. Using said light saber, Crash cuts through the door and opens the way into a massive room filled with people and gates...and tanks. A fire fight breaks out and Wild Jill starts ranting before smashing the tanks together. The rest of the team takes care of the troops and soon there are none remaining. One tank freezes and one tank explodes. Crash uses his light saber to destroy all the gates on the station while Andi blows up another tank. A voice comes over the speaker and informs the group that they will be crashing the base into the planet. Crash plans to push the station into orbit once the team is safely away. Unfortunately this means that Arthur will die in the process. Appearing on the bridge Crash finds himself face to face with a man who looks exactly like him. He shoots him and then uses his abilities from Butch and Kitt to stabilize the station and send it into orbit. Crash teleports to Arena and jacks out, leaving Arthur behind and alive. Back in the base they are joined by Jenika and Brony. There is more work to be done.