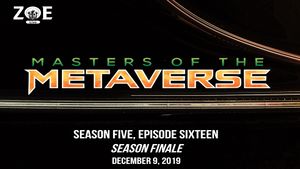 The time of the Redeemer is at hand. After this, nothing will ever be the same for the Metaverse.

Antonius calls forth his chosen champions to take on the challengers. While Brony takes on the Colossus, and defeats him easily, Crash finds himself facing off against Butch Baker. Meanwhile, Andi and Thomas infiltrate the security center and manage to decrease the amount of soldiers on the streets back down to normal levels. In the arena, Crash embraces Butch and with a flood of memories and emotions becomes bonded to him in a whole new way. Butch tells him that Antonius promised to tell him where Crash was if he came to Arena and beat up some "chumps". Realizing the truth of the matter, Butch turns toward Antonius to let him know what he really thinks of him...and promptly vanishes. Antonius declares that Crash is the victor of the match, thus ensuring that Brony and Crash will be the final fight. The two have a mental conversation with their team while engaging in a convincing slap fight, and decide to have Crash teleport away with a lighting bolt while Rosie creates a glamour that shows his destroyed corpse. The ruse works and Brony is pronounced the winner. He is brought before Antonius and enacts Artos' final plan. As the lord of Arena begins to feed on his soul, Brony reaches out and touches him while an implanted device begins to glow. Antonius pulls back as if burned, his ability to take powers from pilots burned away forever. Zenda suddenly appears, leading a charge of revolting pilots, banners with Hex Is Hope emblazoned on them waving high. He makes his way to Andi and Thomas and moves them all to the middle of Arena. Crash, Maddox, Wyatt, Rosie, and Brony are there too and it's clear that the final confrontation is at hand. The pilots give their best but it soon becomes clear that there is something unnatural about this man. Nothing they do to him seems to hurt. He heals everything that happens to him. Rosie casts a curse and prevents him from ever wielding true magic, while Brony draws aggro. Antonius turns his fury on the former gamer and it looks like he's as good as dead...until Monday aka The Chronicler suddenly appears from behind him and pulls him out of the way. Crash notes as she disappears that she is going to get into trouble for that. It's at this point that Maddox asks Zenda to send her to the Morrigan. It's time to finish this. She appears in Nyx where she agrees to sacrifice her soul to free all the beings within. She does so and as all the trapped pilots and avatars are freed, so too is a great demon who appears and sucks the life out of Antonius for breaking the terms of their deal. The fight is over but Maddox has given her life. Rhodes appears and thanks the pilots for what they have done. He tells them the extent of the damage done by Antonius and tells them that he's so proud of them. That Maddox's sacrifice was not in vain. Looking over to Zenda, he announces his retirement and passes the reins to him, stopping the metal arm from killing him...for at least 20,000 years. Later on the pilots bury Maddox and say their goodbyes. After they leave, Monday and Zenda have a quiet moment at the graveside where he tells her that her Order wants him to bring her in...but it's not very high on his priorities at the moment. He suggests she tries a nice beach on Metaverse 113. There's a retired cop waiting for her there. Crash visits his father and tells him the way things are going to be from now on. He's to stay out of their business...they'll handle it from here.