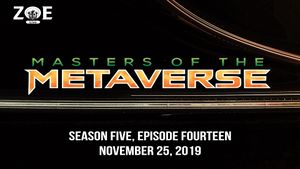 Zeus' final plan is underway and the gods fight in an all out war for survival. The pilots finally uncover what was hidden in the Godsverse.

Maddox returns to the hideout but with no clear idea of what actually happened. It soon becomes clear that The Morrigan has her own plans in motion and Maddox doesn't get much of a say in them. All the pilots had extremely realistic dreams as well. Wyatt visiting with his father, Maddox and Mac, Crash at the wedding of Butch and Abbi, and Rosie with Hex. Zenda spent some time with Jack and Anne as well. Renewed, they prepare for the final step of Zeus' plan. Zenda offers the pilots a last chance to walk before revealing that his master plan involves a bomb underneath the city. Everyone committed to the plan, the pilots head back to the Godsverse...and find themselves in the smoking ruins of Mount Olympus. The gods head into the ruins and find Zeus' hidden vault. Filled with lost relics and artifacts, as well as Hesphestus, the gods arm themselves for the coming fight. Hesphestus allows himself to finally discorporate and imbue the newly acquired weapon with extra godly power. Plans are made and armies and positioned for the last stand on the summit of the mountain. The first wave hits and while the costs are high, Zeus' side manages to hold their own and even push back against Odin's forces. Loki suddenly notices that none of her kin have yet taken the battlefield and decides to scry on Thor to find some answers. She discovers that Odin in planning to use the newly repaired Bifrost to transport himself and his most powerful soldiers right onto the summit of the mountain. The Morrigan is otherwise engaged with Kali, but the rest of the gods manage to deflect the incoming beam of teleportation to push Odin off course. The battle rages on and The Morrigan defeats Kali and wears her desiccated body as war paint. Zeus kills Thor and Odin, and the fight is over. Zeus raises all of the fallen gods and sets forth new laws. Men and gods must keep to their separate corners, no cohabitation. Good to his word, Zeus then takes the pilots to the place he has promised them. The halls of Nyx, the place Antonius convinced him to hide, the place Zeus put his father. The Morrigan is told by Nyx, her mother, that the time of prophecy is not yet come. Nyx also reveals that her halls are full, not only with the beings put there by Zeus and Odin...there are those within her walls that do not belong. Like the missing pilots cast away by Antonius