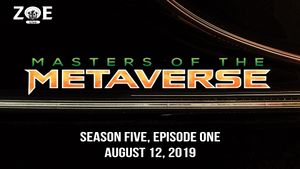 Rosie, Crash, Maddox, and Wyatt adjust to life in Meta-End prison. As they begin to plan an escape, they find more questions than answers...

Crash, Rosie, Maddox, and Wyatt find themselves in Meta End prison. As they adjust to their new reality they find that not only do they no longer have any powers or abitlies, but their friends are nowhere to be seen. The only hint of anyone else they know is the rumor of a man named "Z", last seen suffering in the Box. The group finds out that their wait time to see the judge is in the decades so they settle down to plan a prison break. They have become friendly with the other members of their cell block. Boyd and Wiley are a pair of technology stealing grifters, Brooks is a semi-transparent hit man, and Pelage is an octopus woman who bends time to rig elections. Pelage, who has been there the longest, has heard about meta pilots and avatars though none of the others have. They all have heard stories about a man named "Zelda" who called in a favor and escaped from Meta End. But of course none of these stories could be true...could they? The pilots try to make headway with the prison gang leader, Boggs. Crash nearly gets himself shanked but is able to defuse the situation thanks to a little help from Professor Gatling. He promises Boggs a machine that can make any food he wants using only the tasteless paste that the prison provides. In exchange, he wants to know more about what is on the inside of the prison. Every time a prisoner is hurt or a fight breaks out, the guard drones immediately knock out anyone in the surrounding area. No one has ever seen what is inside the prison itself...not the med bay, not the supply closet, nothing but the cells and the yard. Boggs agrees and as they retreat to their cell to build this amazing machine, Wyatt notices a drone acting differently than the others. It hangs back and looks at them as its light blinks yellow. After Boggs receives his payment, he tells them about a new prisoner who has the skills needed to get them where they want to go. The others discuss how to get to this prisoner and Wyatt relays what he observed about the drones. Using a Three Stooges style fight in the prison yard as cover, the group makes their way to the section of the prison where the escape artists is currently being held. After meeting with their new ally, the pilots decide to attempt to break into the Box and free "Z", who is assumed to be Zenda. At this moment a squad a drones flies through and again, one with a yellow light hangs back. Maddox waves hello and the drone responds by taking out the other three drones in the group. Thomas' voice comes over the drone's speakers telling them to hurry. A panel in the wall opens, leading into a disused hallway filled with desks and dust.