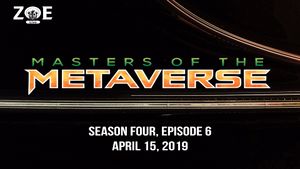 Rosie, Crash, Brony, and Andi are sent to a new Metaverse by TOM. Once there, they must find a map to the Metaverse...and a secret is revealed.

Rosie, Crash, and Brony are sent into a new Metaverse where they meet Andi Jaymes, who has been piloting her avatar for months. They are all genetically engineered super soliders sent out on a suicide mission to try and destroy a galaxy ending plague once and for all. TOM appears and informs them that they need to find a map to the Metaverses which he believes is somewhere in this world. He cannot be more specific or tell them exactly where to find it however, much to Rosie and Andi's chagrin. For his part, Crash is increasingly feeling a sense of deja vu and begins to wonder why it all feels so familiar. The group heads down to the planet and is immediately met by a horde of plagued creatures. Their massive weapons and exosuits quickly take care of the mindless beings but Crash states that there will likely be more. Which there are. The soldiers encounter more beasts and dispatch them all just as easily. Crash is becoming increasingly frustrated with the other pilots who are insisting that there is a chance to do some good in this world, as well as with his own avatar. He eventually goes full pilot stating that he is done with his avatar who has "nothing but a silly accent." He also reveals that he has spent a lot of time in this Metaverse as a younger man. TOM continues to be a bit less helpful than he usually is and seems distracted. He continues to encourage the pilots to seek out the map and continues to be unable to give them more specific directions. He tells them that the core of the planet is not only the source of the plague but that it is also the source of power which is interfering with his ability to pinpoint the location of the map. The pilots finally enter a cavern filled with eggs and a large creature. These are hunters and they are the only creatures that can hurt a genetically engineered soldier. The pilots use various avatar powers and weapons to destroy not only the mother but her eggs as well. Standing, covered in slime and ooze, the pilots consider what their next move will be...