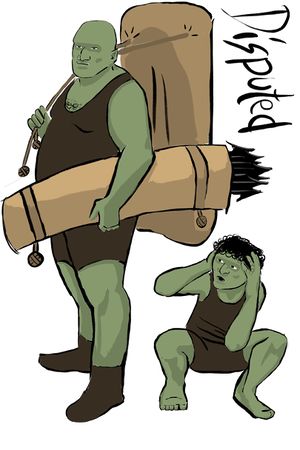 I'm telling mom if you hit me.

An old clan of sifters and pack mules physiologically adapted to their tasks.

The Disputed Clan are the descendants of mudders (slimy-skinned orcs who, under dwarven rule, waded through mud in search of lost valuables) and mules (resilient, strong orcs with defined muscles). They are called Disputed because their kind rose from a dispute between slave sects. During the Red Exodus, the Disputed easily killed their captors, and settled in forested wetlands. Gotta have that mud.

Mudders and Mules have re-emerged within the Disputed, though both still share traits (like skin-sliminess). Mules are gigantic, nearly as strong as giants, and quick to anger. Mudders are thinner, leaner, and friendlier, but will overwhelm hostiles and drown them if provoked.

The Disputed are hired to work for other clans. Particularly, the Black Spears hire Mules to carry provisions.